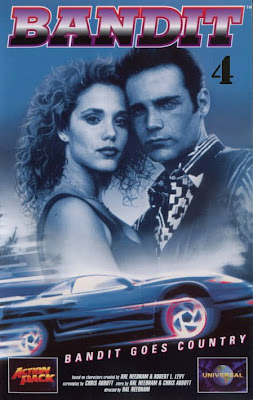 What the shit... there's a "Smokey and the Bandit 4"? Before you pass out from sheer excitement you'll be even more exhilarated when I reveal that there are actually 7, get this, 7 of these damn movies as "Bandit 4: Bandit Goes Country" is the first of 4 television made sequels. What... made for television? No Burt Reynolds and no original characters? Yea... this isn't going to be good.

Well "Bandit 4" is part of an experiment Universal tried out in the early 90's called "Action Block" where they made multiple full length made-for-television movies in order to hopefully generate enough viewer interest to kick-start a television series. With the "Smokey and the Bandit" franchise being long dead for 10 years (and rightfully so after the train wreck that called itself "Smokey and the Bandit Part 3"), the "Bandit" franchise was ripe for revival. Sadly, these television films aren't very good and failed to generate a successful television series to follow.

Well this "Bandit" run of films has nothing to do with any of the original characters, hell there isn't even a Smokey (hence why that term was dropped from the titles). What we get here is another good 'ol Southern Boy actually named, no shit, 'Bandit' (Brian Bloom) and his semi drivin' buddy causing high jinks and getting into trouble while always following his morals and finding plenty of love along the way. In this particular film Bandit heads out on the highway in his Dodge Stealth (the Pontiac Trans Am was old news by this time) to go back to his home town to help his cousin, who's bootlegging music, haul a woodin' bear (you read right) to a town parade while trying to win back the heart of his old high school flame (Elizabeth "Showgirls" Berkley).

Hal Needham, director of "Smokey and the Bandit I & II", returns to direct but that hardly means a damn thing. First off all he's directed more shit than gold and with no Burt Reynolds or budget he has very little to work with in order to make an entertaining return of the "Bandit" with tedious plots, bland characters and unexciting stunts. He also gives the film a far more country feel and less southern good 'ol boy for my taste, even including a sequence of line dancing (the horror! the horror!) and a horrid title sequence featuring a suicide inducing country song, further showing how Universal was hoping this would generate into a full blown television series.

"Smokey and the Bandit Part 3" may have been awful but in a train wreck sort of way it was actually somewhat watchable due to its sheer badness. "Bandit 4" may be a 'better' film but it's strictly TV shenanigans and completely forgettable TV filler. The look, the plot and the acting all reek of "TV Movie of the Week" and it only will serve as a minor curiosity to fans of the franchise.