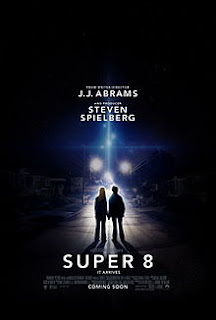 Although the viral campaign had me hooked into the concept of "Super 8", the film itself wasn't the monster flick that was hinted at with its trailers but it is more like the science fiction/dramas of the 80s that producer Steven Spielberg crafted. This lends a bit of disappointment at my end, but its hard to deny the impressive writing and directing that J.J. Abrams brings to the table with this family friendly alien monster film. It hits all the right emotional cues with its young cast and it entertains was massive action sequences. It's all around just another solid film for the new mainstream king of science fiction.

When a group of young teens desperate to finish filming their zombie film happen to see a massive train derailment in their small town, the entire city is thrown into some unusual circumstances. Electronics, engines, and microwaves begin to disappear along with some of the local town folk. The military has taken up to doing rounds in the area. It's beginning to look like something has broken free from the train...something that may not be of this world.

Strip "Super 8" down to the basic details and, yeah, its a monster/alien movie. Tons of special effects, a cleverly designed alien, and some great mystery surrounding the beast makes for an entertaining science fiction film. Sometimes it can be a little ridiculous (the train derailment is seriously one of the most extravagant and over the top train crashes I have seen EVER in a film) and it takes away from the plot of the film...but it is entertaining and it works for the most part and often times seems innovative with how it fits into the plot.

Believe it or not, for an Abrams film, the special effects and explosions are not the best part of the film. Of course his style as a director crafts some very awesome sequences (like the small town being overrun with tanks), but really its his writing that makes this film what it is. Our fantastically acted entourage of kid heroes invokes a childish view of the world  where the mystique of the film is fully realistic and their plight to save one another in a world where adults don't seem to always know what's best allows the audience to pull for them in full gear...cheering on their quest and believing in their friendships and young love with vigor. J.J. Abrams might be a director know for entertaining, but he has one helluva way of combining it with enough emotional attachment to make us believe. Something that mainstream science fiction rarely establishes anymore (...cough, Michael Bay, cough).

I wasn't quite as impressed as I thought I would be with "Super 8" as the Abrams loses some of his own style in the homage to the 80s childhood wonder of Spielberg's vision, but the execution of the film with its solid writing and great acting makes for a solid science fiction romp. Occasionally it runs into a few awkward plot moves (with Coach Taylor being able to escape military?), but overall its a fantastic watch. One that I fully recommend.