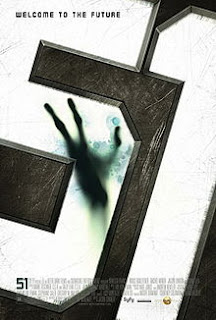 After being pleasantly surprised with "Seconds Apart", my faith in the After Dark Originals was rising...only to be crushed by the science fiction/horror atrocity that is "51". As with "Scream Of The Banshee" I was instantly discouraged by the SyFy logo that graced the beginning of the film and nothing from that point on lead me away from those assumptions. In fact, it may only go downhill from there as any hope of legitimate science fiction or horror is swept away in shoddy special effects, horrid acting, and a knocked off script from far better films. Yeah, it's that good.

Due to commercial pressure from the news and the people of US, the government has decides to let two very invasive reporters spread the word about what's truly in Area 51. With the military on half patrol and a plan to let them see everything but the actual aliens in the facility, the tour seems to be going fairly smoothly. That is until a shape shifting alien called Patient Zero decides to let loose a few of his pissy alien friends...

It's always refreshing to have to push one's way through a film, knowing by half way through that it isn't going to get better. "51" is exactly how that is. From its poorly designed sets, lacking vision of the story, and its horrendous acting it was borderline stressful watching this film wash down a perfectly hilarious concept. Hilarious in all the wrong ways, I do mean to say. Our actors seem half assed in their dedication to the characters as the characters are written and the plot progression is about as by the numbers as one can get, only separating itself long enough to throw in some completely random details that rarely make sense (the purple vapor for Patient Zero is actually a mixture of bloods....why? Who the fuck cares?).

On top of being completely idiotic in its plot and characters (who puts that many inept soldiers on the most top secret base anyway?), the film itself blatantly steals from other far superior science fiction horror films. The military and alien battle with the two insectoid like monsters obviously steals moments and ideas from "Alien" and our survivors below with the shape shifter has far too many stolen ideas from John Carpenter's "The Thing". This is executed with reluctant dedication to the special effects that look as cheap as the SyFy original it became.

Fan of science fiction horror films? Don't bother with "51". It's cheap, silly, poorly executed, and down right burdened with trying to sell a half thought through script. Only good for unintentional laughter of which there is a few good moments. That's about it though. Not worth the time nor money unless one is intentionally looking for the bad. In that case, eat up.