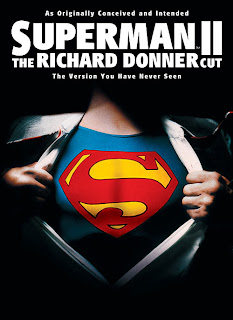 Decades before the whole "Exorcist" prequel ordeal, "Superman II" had the most tumultuous production of any Hollywood sequel in which original director Richard Donner was fired and replaced by director Richard Lester after having shot nearly 3/4 of the picture. Due to popular demand by fans Warner Bros. went back to the vaults, dug out and dusted off all of the footage Richard Donner shot and with the director overseeing, re-edited his original vision of "Superman II" as close as they could get with the materials provided. This edit was highly praised but I always question the opinions of die-hard fans. Sometimes due to the fact versions are more rare and/or controversial, fandom often blinds people into automatically assuming the rarer version is better. That and for the fact I was a fan of the Richard Lester's theatrical version of "Superman II". Now, after finally viewing Donner's cut I can honestly say that I prefer the Donner version by a small hair over Lester's theatrical counter part... but not without many reservations.

This new cut contains roughly 83 percent of footage originally shot by Donner with the rest being footage shot by Lester after Donner's firing which was only included in order to have plot fluidity. Much of this footage of Donner is first takes so many of the sequences tend to be overlong and the character development tends to be flawed... however if Donner had continued on with the film he would of done re-shoots of many key sequences and been involved with the final editing sequence which couldn't be accomplished with the compiling of this restored version.

There are also some scenes reused from the original "Superman", most notably the ridiculous scene where Superman turns back time by spinning the Earth in reverse. Apparently this resolution was intended for "Superman II" with an open-ended ending to the original film but the Salkind producers chose not to end the original with a cliffhanger. Due to this Donner wrote in Lois'death in which the 'turn time back' resolution would be used so seeing the sequence again in this version makes it a little redundant.

This cut also has plenty of plot holes and leaps of logic that even the Man of Steel can't fix. As this cut stands right now, Luthor would be in the Fortress of Solitude when Superman destroys it. Also Superman's revenge against a dinner asshole makes no sense as it occurs after the 'turn back time' sequence hence negating the whole confrontation. These of course are just the major plot holes that tend to irk me just a bit.

What I do like about this cut more than Lester's theatrical vision is Donner's understanding of the Superman universe. Lester's version introduced absurd powers that Superman never had before, most notably the asinine 'kiss of forgetfulness'. He also added a hair too much silly comic relief that clashed against the tone of Donner's original film, most notably the buffoonery during the final fight sequence, a town full of people with British accents and General Zod's introduction to the world. Donner's version is much more serious without the over-abundance of slapstick shit.

The reappearance of Marlon Brando is also worth noting. These scenes were left on the cutting room floor as Brando demanded a higher paycheck to appear in the sequel in which the producers were not willing to pay. Even if he was overpriced it's nice to see him back in the film.

Donner's version has plot hole issues abound and lacks the finesse of a final film product thanks to abrupt scene transitions, redundant scenes and all around rough edges but if Donner would have been able to finish his vision I have no doubt it would have ended up better than Lester's theatrical version. Donner's version is just more true to the Superman lore without the overly comedic overtones. Overall this ends up being a great curiosity piece of what 'could-have-been' and a must see for fans, but I am glad that the Lester version still exists as I do prefer the polished final film product of that version.