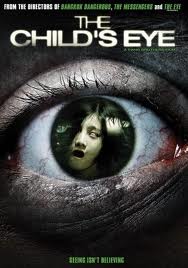 "The Child's Eye" is almost a relief to me. It's good to know that the US isn't the only country that is making shitty mainstream horror films. Whew! That's a burden off of my shoulders! This fourth entry into the "Eye" franchise (where each entry has nothing to do with one another sans being ghost stories) is perhaps the worst yet or at least gives the awful "The Eye 3" a run for its money in crappiness. It's silly, not scary, makes no sense, and worst of all - it was shot in 3D, making the Pang Brothers do all kinds of campy tricks. Fans of ghost films beware, let this one be...it's not worth conjuring up.

A group of six friends (three couples to be exact) find themselves at odds when their Thai vacation comes under fire by protests that shut down the airport. Thusly they are dropped off at a random hotel in the middle of the riots which just so happens to be haunted by one pissed off lady. Can the friends solve the mystery of forlorn woman before she takes them all into the realm of the dead?

It's very hard for me to describe to you, oh dear readers, the complete idiocy of this plot. It hurts my head to think about it because there are so many plot holes, useless characters, poorly developed subplots, and poorly crafted sequences that it would drive any sane person to see spots. Where to begin? Our protagonists (which randomly appear and disappear throughout the film) are paper thin excuses for real people whose couple problems seem asinine and their actions silly and unprovoked. This only deepens the stupidity of the main plot, where dog boys are real, - oh I shit you not, there is a boy with a dog face that is completely unexplained in this movie - ghosts have no real reason to be doing things, and the ways to solve our mystery just sort of happen instead of build up. The Pang Brothers were never "great" writers to begin with, but this feels like a money fodder movie that was written in 15 minutes to bank on the franchise and the 3D gimmick. It simply never makes any sense.

The Pang Brothers, however, still have a knack for creating some intriguing visuals. That doesn't mean that any of them have to make sense though. We get weird leaps into a strange 'netherworld' where vines creep on things, objects fly at the screen, and a finale that's easily taken from the scrapped ideas of "Re-Cycle". There are some legitly creepy visual moments like the dog boy and his sniffing, but the lacking build to these moments and complete disregard for logistics in them rarely makes any of them scary.

"The Eye" franchise had never lived up to its amazing first entry and "The Child's Eye" caps off with perhaps it's weakest entry yet, despite some solid ideas here and there. It's idiotic, poorly built, and the 3D moments out of the blue and gimmicky. There is not much to love about this film and its so sad to see the Pang Brothers release another piece of garbage when we've seen how good they can be.