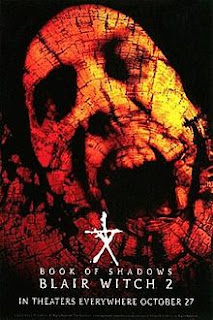 How do you make a sequel to a horror film that changes the landscape of horror films in the late 90s? Make it as cliche as possible is the only answer I can gather from "Book Of Shadows: Blair Witch 2". Although there is some interesting ideas here, buried in poorly paced horror formulas and mixed executions, this sequel to the revolutionary "Blair Witch Project" is even a disappointment to someone who thought the original was overrated.

A group of young folk, desperate to investigate if the myths behind the surprise hit "Blair Witch Project" hires a local man (Donovan) to take them on a tour to where the events of the film took place. Unfortunately, their night of fun and research turns awkward when they awake to find a serious chunk of their night missing from their memories and the tapes of their recorded visit to the site holding clues to what happened. Now the lines of reality are blurred and people are beginning to die...

There is something clever about "Blair Witch 2" in idea. A film about the hype of the original film? Interesting, pseudo-documentary twist on the concept (hey, Tom Six! That means this idea was done before "Human Centipede 2"!) where the general plot perks my interest. The odd way that things play out where its told in retrospective via interrogation and some of the more thought through scares work on me a bit. There is some very clever ideas at work here in this movie and some of the directions that the movie moves can be inspired...

...but...if concepts sold everything then there would be a lot of great movies out there. This one just never gets it across like it should have. The acting can be horrendous at times, the dialogue is forced, the scares are from left field and rarely impact like they could have, and the random directing (with leaps to our main local character in a mental asylum) will leave you scratching your head at times. Although our lead actor is charming at times and occasionally the plot plays off with surprisingly solid atmosphere, the rest is extremely lackluster. It sort of lingers in a pool of mediocrity - never delving into B-movie territory, but not reaching the height of its A-horror film release either.

I might be the minority here as I don't think "Blair Witch 2" is a complete train wreck, but the film certainly isn't good either. It rocks itself on some great ideas of which almost none of them are executed in the ways they should have been. It has its moments, a few charming moments here and there, but the overall film is just plain mediocre.