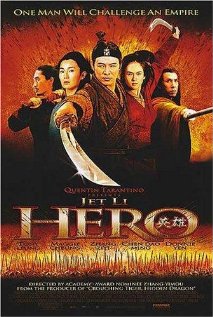 Although at times I feel Zhang Yimou's films are a bit too much art in martial arts (see "House Of Flying Daggers"), his true triumph in film making comes in the form of "Hero". This little wuxia film blends brilliant sword play, fantastical elements, artistic values, and some ideologies of classic China history into a mixture that's both beautiful and volatile. A lethal combination that leaves one stunned with visual prowess and intense fighting all done with a brilliant eye for balance.

A nameless sword master (Jet Li) has to accomplish the unspeakable for the King Of Qin (Chen Daoming) to receive massive acclaim and awards. He must defeat three of the world's deadliest assassins, Sky (Donnie Yen), Falling Snow (Maggie Cheung), and Broken Sword (Tony Leung) just to gain an audience with the King. Can this swift swordsman truly finish the task or is there something larger playing out?

There is so many great things that go on with "Hero" it's hard to find a place to start for this review. So let's start at the bottom with the foundations. The story for "Hero" is clever and immaculately structured. Told as a re-accounting of previous events via our nameless swordsman, the structure of the film leaps from present to various versions of the past. The various versions each have differing details as we get Nameless' tale, the King's impression, and the truth. These three versions each have intense moments of sword fighting, new elements to the intense and passionate characters, and discoveries that make you go "oooohhhh". Nothing like a good "ooooohhhhh" to get one into the film.

This is, of course, all heightened with Zhang Yimou's visual finesse. The brilliant shades of colors and fantastical elements of leaping add a flair distinct to each story that embraces the emotions of the moment and magnifies the eye gobbling epicness of the film. It envelopes the characters (and the audience) into the moment. With the strong casting and riveting performances of our leads, the on screen ferocity of the dramatic elements is out of this world.

The dramatic elements is all fine and dandy, but we also want some kick ass martial arts...am I right? Luckily, this is in full effect here too. There is sword fights up the ying-yang here. We get all kinds of ridiculous high flying fights including a fight while leaping off water, a richly textured sword fight in swirling fall leaves, and the highlight of the film: Jet Li and Donnie Yen duking it out on a rain drenched playing area. Martial arts fans will eat it up.

"Hero" is by far one of my favorite martial arts films of all time and its visually stunning look, impressive choreography, and amazing acting all create a film that's as potent as it is fun. Whether you agree with some of its themes or not, "Hero" is a beast of a film and one to be remembered.

Written By Matt Reifschneider
Posted by DarkReif at 10:18 PM