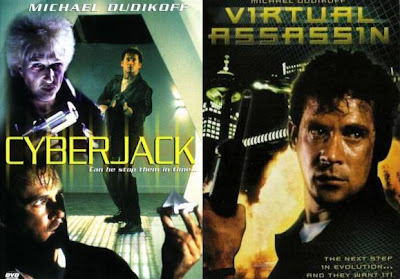 I have an insane, some might call unhealthy addiction for any film starring Michael "Dude"ikoff. Being a huge Cannon film buff I first saw such 'astonishing' Dudikoff performances in such films as "American Ninja", "Avenging Force" and "Platoon Leader". For the most part I haven't seen many films he did after Cannon languished... and "Cyberjack" proves it's for good reason.

The plot is nothing more than a lame "Die Hard" rip-off with healthy dose of that virtual high-tech bullshit that so many films in the early 90s tried to capitalize on. Dudikoff is a burnt out ex-cop that takes the job as a janitor for a computer virus facility. After grimacing through some sequences where he flirts with his boss's daughter, the building he works at gets high jacked by a psychotic albino (Brion James) that just happens to be the same guy that blew his partner away. Now it's time to go all John McClane on their asses.

So many plot elements are recycled from "Die Hard" that one will fill an head-ache inducing sense of deja vu waving over them. Crawling through ductwork: check. Killing guy to get machine gun: check. Hero clashing with police outside: check. Trust me, all the "Die Hard" cliché's are here.

Aside from the "Die Hard" elements the high tech futuristic portion of the plot is also completely ridiculous. Our head villain wants a computer virus injected into his body in order for him to go viral. Seriously, are we ripping off "The Lawnmower Man" also? Hell, I will admit the plot is more intriguing than "Lawnmower Man 2".

The production values are low and Dudikoff's performance is on caliber of stiff cardboard, but all this is to be expected. Veteran actor Brion James ("Blade Runner") steals the show as our villain but his appearance is so god damn hokey that he only induces laughter instead of terror. His white albino look and crazy 80's fountain hair is nothing more than absolute ludicrousness. Come on guys, this is the same guy that gave us the insane sadistic performance in "The Horror Show" so give him some dignity when he appears on screen!

"Cyberjack" is nothing more than an extremely low rent futuristic action film that serves nothing more than filler on the video store rental shelves. At the same time it proves that Dudikoff sorely misses the B-action magic of the Cannon film logo in order to make is drivel at least entertaining. My advice is to skip it unless you catch it on a midnight showing due to insomnia.

The film ironically was released under two separate titles no doubt wanting to fool people into renting such drivel twice thinking their getting a different film. The first is the more catchy and fitting "Cyberjack" and the other is the utterly generic "Virtual Assassin." The version I own on DVD is under the latter title from Lionsgate and it's obvious "Virtual Assassin" is not the original title as the font and cheap graphics look nothing like the rest of the opening credits.

Written By Eric Reifschneider
Posted by Cronosmantas at 8:32 PM