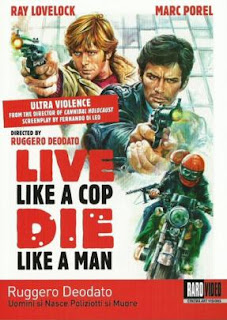 Ruggero Deodato will always be a name synonymous with the controversial classic "Cannibal Holocaust" and the urban exploitation shocker "House on the Edge of the Park." Few seem to remember that he has directed films beyond those two monstrous efforts and a few commendable films at that. One of his good films prior to his gruesome twosome is the Poliziotteschi action police thriller "Live Like a Cop, Die Like a Man."

What we have here is two young police officers that that seem just deranged as the criminals they are chasing. They live and breathe their job, sharing an apartment, ridding bitch to work on a motorcycle and even screwing the same women. What makes them just as deranged is that they brutally kill and maim criminals, breaking their necks after wrecks and even killing the scoundrels before they even commit a crime! Their boss doesn't agree with their methods but likes the results and must come to their rescue as they take on the biggest crime lord in town.

The action is fast and furious as we open with an absolute astonishing motorcycle chase in the busy streets of Rome with no permits. Typical in Deodato fashion the violence is also upped compared to the typical entry into the Poliziotteschi genre, which is hard to believe as it is a monumentally violent genre to begin with. We get goons riding over blind men's seeing eye dogs and even eyes gouged out. However these villains are so nasty they deserve to die horrible deaths.

Our two queer cops are captivating anti-heroes. Mixing their amoral attitude towards human life with their homosexual undertones of their partner relationship makes them really engaging and perfectly played by young Italian hotshots Marc Porel ("Don't Torture a Duckling") and Ray Lovelock ("Murder-Rock: Dancing Death"). Ex-Bond villian Adolfo Celi ("Thunderball") is surprisingly underplayed as their boss and I do wish his character was a little more fleshed out.

Famous Italian filmmaker Fernado Di Leo, popular for his Poliziotteschi "Milieu" Trilogy ("Caliber 9", "The Italian Connection", "The Boss"), pens the script. His "Milieu" Trilogy is the "Man With No Name" trilogy of the Poliziotteschi film genre but I always felt his directing style was subdued. In comes Ruggero Deodato who spices up his script with oodles of style, marvelous camera angles and utmost violence. Ruggero never makes a moment of "Live Like a Cop, Die Like a Man" boring to look at.

Mixing the impressive talents of screenwriter Fernando Di Leo and director Ruggero Deatato makes for a visually stunning, thrilling and violent Poliziotteschi cop film. A few flaws get my goat, like their rather lifeless boss and awful freeze-frame ending, but overall one of the must see films of the genre and easily one of Deatato's best films of his career. I waited patiently years for this classic to reach stateside and patience finally paid when Raro, an Italian DVD company, decided to give the film an American release, despite the release date getting pushed back three separate times! It was well worth the wait.

Written By Eric Reifschneider
Posted by Cronosmantas at 7:30 PM