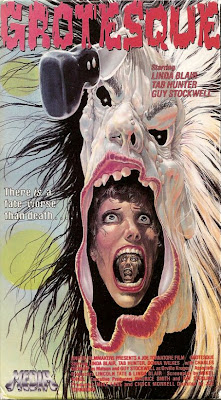 After getting worldwide fame for her demonic portrayal as a possessed girl in "The Exorcist" that earned her an Oscar nomination, star Linda Blair found herself type-casted and couldn't get any acting gigs other than cheap B-movies and exploitation films. Through these films Blair earned herself a loyal fan base... hell even I have a soft spot for her as "Savage Streets" is one of my all time guilty pleasures. Sadly for every loveable trash effort she did, there's a polar opposite with "Grotesque" being on the other side of the spectrum .

"Grotesque" is a typical home invasion horror flick with a young woman (Linda Blair) and her best friend (Donna Wilkes) traveling up into the snow packed Rocky Mountains to spend time with her parents. When some sadistic splatter punks invade their home, killing many of the family members in order to find money, Blair's grotesque and misshapen step-brother decides to get vengeance.

What gets me about this film is it has so much fucking potential. Blair and Wilkes ("Angel") are exploitation goddesses and they are sorely underused. The plot of the grotesque brother is not given much back story and the film runs completely dry at the hour mark.

The punks themselves are so over the top and sadistic that one can't help but laugh. The best way I can describe them is the 'splatter punks' from the beginning of "RoboCop 3" with their wild spiked hair and pasty skin. They are so fucking nasty that you truly root for them to die in the absolute worst ways possible... the aspect the film sorely misses its mark on.

Other then Blair, Wilkes and our lead punks, the acting itself is quite atrocious. The worst is the two bumbling cops trying to solve the case. What did they do, cast two local yokel cops? The make-up effects also leave a lot to be desired, which is ironic as Blair's father in the film is a Hollywood horror movie make-up artist.

However these are just minor quibbles compared to the shit of all shit endings. You think the dream ending to Umberto Lenzi's "Nightmare City" was a cheap cop out... you ain't seen nothing yet! I had to restrain myself from throwing my Iron Maiden 'Eddie' bobble-head doll sitting on my coffee table through the television screen. I shit you not this is one of the worst fucking endings I have ever seen!

I wanted to like "Grotesque".... I really really did. The snowy mountain setting, the exploitation cast and the idea of a misshapen monster killing punks perks my interest but this was a poorly executed excuse of a horror film with the end-all worst wrap-up ever. What exactly Blair saw in the messy script to also serve as producer is beyond me.