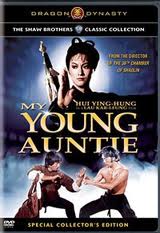 With stellar films like "36th Chamber Of Shaolin" and "Shaolin Mantis" under his name, my appreciation for director Kar Lau Leung and his ability to craft some of the Shaw Brothers most brilliant kung fu films was only growing. One of his films that seems to be a fan favorite is the often silly, but still kung fu packed "My Young Auntie". Although the film sports some great moments and some stunning choreography particularly towards the end, its rather oddly paced structure and hit or miss comedic sequences left the film lagging behind some of his others. One that fans are sure to love, but might not appeal to everyone.

A young woman (Kara Hui) ends up marrying an elderly man to help prevent his evil brother from inheriting his wealth and land. When her husband dies, she takes to living with her nephew (Kar Lau Leung) and grandnephew (Hsiao Ho) to avoid being bullied by the evil brother. Here she begins to learn a few new things from her westernized grandnephew and has to eventually team up with her new family to overthrow the evil brother.

Director Kar Lau Leung is one of my favorites from this era of Shaw Brothers martial art films. Even though "My Young Auntie" does throw in a bit more comedy into the routine than his more straight forward kung fu films (like "Shaolin Mantis"), its hard not to be impressed with how Kar Lau Leung handles the extensive fight sequences. The finale of the film is almost completely non-stop choreographed fighting dealing with all sorts of weapons/styles and easily highlights the film as our two leads stage a full on attack of the villain's house. Even the earlier fight sequences, although more or less tongue-in-cheek, have well choreographed fights that intrigue the eye like one done at a western themed masquerade ball and a street fight with our leading lady in high heels and a dressy gown on. This is the main reason one should watch "My Young Auntie" and fans of Leung's other films will easily enjoy this one in that aspect.

On the plot and style of the film though, I wasn't so easily impressed. The humor can be hit or miss, with tons of slap stick borderline sex comedy thrown into the mix (mostly through the grand-nephew character) and the plot can be a bit of a confusing stretch with its hierarchical family drama and who gets what for inheritance. The film seems to dabble quite a bit in the culture shock of the west and east of the time period and often seems to lose track of its focus and the direction of its goal by throwing in a rather random sequences that only seemed fitting for a background for fights. The masquerade ball is visually arresting but only serves as an elongated distraction for our villains to steal the will of the deceased husband. It fluffs the film up nicely, but rarely adds the needed nuances to give it weight.

Although "My Young Auntie" is one of the more popular pieces for the director and cast (even earning our leading lady a Best Actress award for that year in Hong Kong) with its unique tale of battling sexes and a changing landscape in China, the end result is a bit mixed. It never seems to find the right balance of humor and action to flow properly and its visual astuteness seems undermined by ill explained plot progression and often misdirected attention. Great choreography saves it through many of its longer sequences though and earns much of its merit that way. A Shaw Brothers classic perhaps, but not quite the film I was expecting.