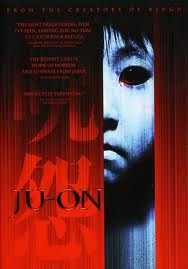 There is very little that scares me. A few films earn their merit with suspense, but true scares? It's rare. Not unless you're talking about "Ju-On". This movie, whole-heartedly, creeps me the fuck out. The artistic style of the film with its leaping and weaving plot structure, the scant and effective score, the sound effects, the realistic acting...it all builds to one of the best ghost films out there and one that, to this day, I will not watch late at night.

Rika (Okina) is a volunteer social worker who is assigned to help a young family with their ailing mother. When she arrives at the house though, the married couple is nowhere to be found and she stumbles upon an unusual situation. A situation where she begins to see a ghostly young boy and a creaking woman who seems intent on hunting her down...

A culmination of popular made-for-TV short stories, "Ju-On" was crafted from bits and pieces of semi-related stories from director Shimizu. His ability to work the low-budget with artistic finesse and atmospheric build makes the weaving story and characters work to its benefit. It creates a memorable way of telling the tale as we watch the fates of numerous people interlock at the hands of this 'curse' and the two ghostly figures that gobble up lives whole. Although at times the time-jumping (and foresight in one case) may seem a bit sporadic, a few repeated viewings help one to piece together the rather scat clues to what happened and is happening. It's an artistic take on the haunted house film that really works in many ways, even if it seems a bit overwhelming in its simplicity at first.

"Ju-On" also succeeds in crafting some legitly scary moments with relatively nothing. Shimizu loves to manipulate tension with false builds and subtle shock moments that rarely use sound to give the audience the jump scare. The effective scoring and sound effects (the woman's croaking and snapping bone sounds are insanely nerve warping) add to the clever shots and the film's almost impressive lack of blood and gore makes the moments where they do appear so much more impactful. Even the relative simplicity and normalcy of the settings work in the benefit of the film's scare tactics.

Occasionally, the low budget does hurt the film (with some shadow effects coming off as poor) and the acting can be hit or miss in moments, but the general effectiveness of its storytelling techniques and tension scares overwrites so many of the flaws that they are hardly noticeable. This is the reason a rather simple film like "Ju-On" spawned so many sequels and remakes...it works what it has so well that one misses what the film falters at. An impressive way to present a ghost film.