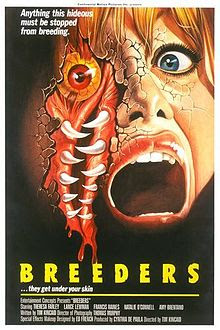 "Breeders" is Tim Kincaid's second of three direct-to-video (a new trend at the time) of horror/sci fi hybrid films he directed for producer Charles Band's Wizard Video line (though Band did decide to give "Breeders" a very limited theatrical release). Out of all three (also including "Robot Holocaust" and "Mutant Hunt") this is the most tasteless, vulgar and the downright repulsive. Then again a horror 'monster rape' film with a title like "Breeders" one can't expect a film with any sort of class or respectability.

Virgin women are a small commodity in New York City to begin with but they become even more rare with a slimy underground space creature decides to procreate it's race by mating with New York's most coveted citizens. Now it's up to a dim-witted cop too young to grow facial hair and an over-made up doctor to kill the creature before it's offspring can cause the end of the human race.

What "Breeders" is as an extremely cheap knock-off in the questionable 'monster rape' subgenre of films that is desperately trying to mimic the success of "Humanoids of the Deep", made by Charles Band's more respectable partner in crime Roger Corman. Unlike that film which had a competent director and suitable actors, "Breeders" is just shit filmmaking all around.

The casting is also odd as Tim Kincaid no doubt cast young women based on beauty and not if they fit the description as a virgin. One snorts cocaine, one dances nude in a photography studio, etc. Drug use and openness to nudity is all elements of quote, un-quote 'virgins'. Trust me, these girls have been around the block.

It's not just the acting and directing, but the monster suit, writing and even the sound quality is absolute rock bottom. Some of the dialogue is hard to make out thanks to the cheap sound recording that causes a hiss whenever someone speaks. Then again hissing is more pleasant listen to than compared to some of the crap dialogue. The monster suit also nothing more than a cheap rubber costume with glowing bug eyes covered with slim (I will admit that some of the gore effects are impressive and ghastly).

"Breeders" was a trying film experience. It could have had some B-movie chuckles with its horrid filmmaking if it weren't for the offensive subject matter, which comes to a head in the climax when all our women swim around in a vat of what looks like alien semen.... barf. "Humanoids from the Deep" had respectable qualities... "Breeders" does not and fails to entertain even on a bad film grade scale. It's amazing that a film of this nature got re-released on video and DVD by a respectable company such as MGM and even inspired a loose remake in 1997 under the same title.