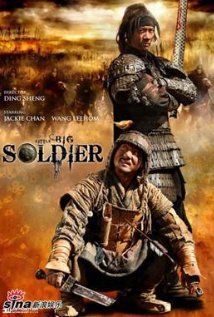 Jackie Chan's career has taken some unusual turns through the years. Stuntman, comedian, action star, Chinese films, American films...the list is extensive. His latest kick (now that he has been getting up there in age) is that of a more dramatic turn. "The Shinjuku Incident" played off with an almost "Scarface" like tale and his latest, "Little Big Soldier", combines his many faces into one film. Comedy, action, and drama all make this historically set film on that Chan fans will instantly love.

A grizzled and weary soldier (Jackie Chan) has to stay alive as all of China begins to boil over with warlords intent on unifying the country under their flag. This is why he fakes his death at a massive battle between two of these warlords. To his luck, he finds a wounded general of the enemy army (Leehom Wang) and decides to take him prisoner to earn a few acres of land for the capture. All he has to do is get him back without losing him first, which might prove more difficult with an unruly land full of enemies to go through.

At first glance, this rather slow paced and character driven tale is one of lackluster pacing and subtle dialogue. My initial reaction was disappointment at the lacking action and comedy compared to the dramatic storytelling. After a few days though, I kicked the film back in with new expectations and realized how well the film plays out in execution. It's not perfect, but it's certainly a film that grows on you.

Chan and his co-star Wang have a chemistry that really makes the film work. Even though "Little Big Soldier" throws in enough action sequences to keep those older Chan fans interested (including a fantastic fight between the two leads in a barn over the possession of a sword) and enough of Chan's distinct goofy humor for those who loved to be entertained (like seeing Chan ride a buffalo through a wall or hearing him sing about what he is going to do with his land when he gets it), the film strives for the heart and soul of the two leads' character arcs. The film nails it. By the end of the film, we have grown so attached to these two and their growth as characters that its hard to let go. An indication that this film easily accomplishes what it needs to dramatically.

As I mentioned though, the film is rather slow paced. It's very subtle with its first half, taking its sweet time to build itself with our two characters and one has to pay extra speial attention to the details to make sure that the few twists at the end are worth their weight in the punch. That's why it took two viewings for me to appreciate the film.

"Little Big Soldier" does tell this tale in fine fashion, only truly hindered by some unfinished subplots, like a woman who leaves them in the house only to mysteriously show up at artistic times, and some poor computer generated effects. Otherwise, it's a must see Jackie Chan film that ably blends all of the sides we have seen of this charismatic actor through the years.