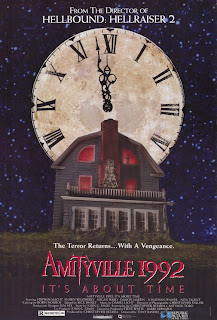 Nothing dates a film faster than proudly displaying the year it was made in the damn title. It seems the distributors learned the errors of their way and removed the "1992" from the DVD release and not just on the box artwork. They actually went into the film itself and put in a blatantly obvious black box over the '1992' on the title card which just brings me to a chuckle. Despite the silly title and botched attempt to correct it on recent releases, "Amityville 1992: It's About time"... err.... I mean "Amityville [insert black box]: It's About Time" actually ends up being one of the better entries into the overlong haunted house series.

An architect shows up home bringing an antique clock which he found in some rubble of a house his company tore down in Amityville for a new housing development. Guess what house the clock came from? Of course our demonic clock takes our family on a thrill ride from hell as the Amityville demonic forces have found a new home in California and it's up to delinquent boy to stop it once and for all.

The plot is VERY derivative of the fourth film "Amityville Horror: The Evil Escapes" in which the Amityville curse was brought to a new house and family due to a possessed lamp. Substitute the lamp with a clock and you have the plot to this sixth entry. Unlike that film which had a drab look and made-for-television production values, "Amityville 1992" has the fun, stylistic and slightly over-the-top approach thanks to director Tony Randall, veteran of the celebrated sequel "Hellbound: Hellraiser II". The overall feel to this film is similar to a "Nightmare on Elm Street" sequel and thus makes it a HELLUVA lot more entertaining compared to the last few "Amityville" entries.

The cast is full of seasoned character actors including the gorgeous Shawn Weatherly and underrated Stephen Macht who gives a truly deranged performance as the architect possessed by the evil of the clock (it does seem a little ridiculous when you actually type it out). The luscious Megan Ward gives a saucy performance that is guaranteed to seduce all the male audience members.

Like a "Nightmare on Elm Street" film the special effects are really eye catching, including corpses, alternate dimensions, dog attacks and people melting into puddles. Like many horror films the special effects become the spotlight but for films of this nature it's all in good fun. Mix that with surprisingly solid production values for a direct-to-video production makes this for a good horror popcorn picture.

For a sixth entry into an overlong, mostly lame franchise I actually found "Amityville 1992" to be a lot of fun, even despite it's cop-out ending. Sure it's getting further and further from its "true haunted house" roots but at least it breathed new life into a floundering series.... plus it has glimpses of the infamous Amityville house, an aspect the fifth film "The Amityville Curse" sorely lacked. Highly recommend for fans of the "Nightmare on Elm Street" series.