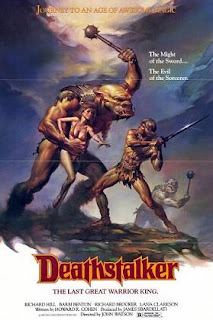 "I only kill to stay alive, not for the luxury of glory" - Deathstalker

Out of all the sword & sorcery clones that came in the wake of "Conan the Barbarian", none has a worse reputation than "Deathstalker" (though "Ator the Fighting Eagle" could easily challenge "Deathstalker" for the that trophy turd ). "Deathstalker" is bad, real fucking bad... yet I love it. I will be completely honest and say that "Deathstalker" is one of my all time favorite guilty pleasures hence why I decided to bump it up a 1/2 star in my rating when it most deservedly should get nothing more than 1 star.

Taking place in a time of barbarity and magic, Deathstalker roams the land raping women and killing trolls and other monsters. On a rather random note, he meets a king who tells him about a sadistic wizard who took over his castle. Deathstalker, with the help of a topless warrior woman, travels to the wizards castle to enter his tournament, hoping to kill the wizard and to bed any beauty he likes.
"Deathstalker" is the brainchild of schlock rip-off producer Roger Corman and even he seems to be a little embarrassed to have his name attached to such a feeble exploitation film as he goes uncredited. Though his name is no-where to be seen in the opening credits, "Deathstalker" still has the main two ingredients that Corman productions always deliver: 1) Violence and 2) Nudity. "Deathstalker" is full of these two ingredients as I lost count how many heads roll and boobies pop out.
The production values are equally as shoddy as the overall filmmaking. Cheap cardboard sets, bad wigs, and ridiculous outfits. Even John Carl Beuchler's special effects are as delightfully absurd as they would be in later Charles Band productions "Ghoulies" and "Troll". My favorite special effect is the face of a cave troll and the actor actually has to fix it on his face while the camera was shooting. Seriously, what the hell?
Our hero, the ridiculously named Deathstalker, is woodenly portrayed by Richard Hill (sometimes known as Rick Hill). "Hero" should be used loosely as this guy isn't even too shitty to be an "Anti-hero". Seriously this guy fucking rapes women and kills and steals from whomever he pleases. Our evil "hero" is matched by an interesting evil villain in the form of Monkar, an albino wizard that has a strange tattoo on his face and a hand puppet monster in a box. Monkar even has the amazing ability to spontaneously change the sex of anyone he pleases, making for an awkward attempted rape by Deathstalker when he finds out the women packs a little more below the belt than he expected.
I won't lie when I say "Deathstalker" is the lowest common denominator when it comes to filmmaking but at the same time that's what is appealing about it for me. The extreme violence, nudity, shoddy effects, bad dialogue and unlikeable hero makes this awful "Conan" rip-off a must see for connoisseurs of trash cinema. Hell "Deathstalker" even one upped "Conan" by being followed by three, count 'em, three fucking sequels and even a spin-off franchise in the form of the "Barbarian Queen" duology. "Conan" was only graced with one crappy sequel... and I would much rather watch "Deathstalker" any day over "Conan the Destroyer". Take that Conan!

Bonus praise: I love the sequence where a soldier with a pig head, while at a feast, picks up a roasted pig head on a platter, looks at it awkwardly, and then takes a bite! The filmmakers must have loved it too as it would make an appearance in both "Deathstalker II" and "Deathstalker IV" as stock footage.