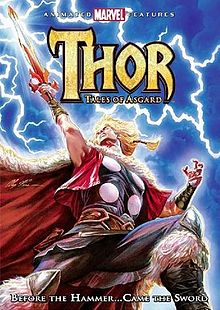 With the superhero film craze that has been dominating theaters for the last decade, its been Marvel for the win all the way. Their films have just simply been better (sans Batman - which seems to be the exception). When it comes the animated side projects being released to home video...well DC Comics has edged out Marvel far far and beyond. The latest Marvel production, a back in time look at Thor in his teen years called "Thor: Tales Of Asgard" is not an exception. It's an animated fantasy film that can't even touch the live action "Thor" film in any way that just slightly rises itself above a He-Man episode. Not quite what I wanted in quality.

Thor tires of being trained by the warriors in Asgard. He thirsts to prove his worth as an adventurer and warrior, but his father Odin forbids he leave the sanctity of home. Thusly, the teenage Thor decides to high tail it to frozen lands in search for the lost sword of Surtur - a vile demon that his father once slayed in battle. His quest may not be easy and even though he has the support of his magician brother Loki and The Warriors Three, his thirst for respect just may start a new war and bring out a hidden villain in the wake.

Having just watched the relative fun and quirky film "Thor", I felt it necessary to see this unnecessary companion piece about a quest for a magical sword from Thor's teen years. Did I mention this was an unnecessary release? It is. It really adds nothing new to piece together with the feature length film sans a rather oddly built backstory between Thor and Sif, his warrior lady friend, and never climbs above feeling like a really long and drawn out Saturday morning cartoon. The story is fun and basic, not pushing into more adult territory like the DC animated films do, and would be great family entertainment as the kids can watch it with little explanation. Beyond that though, "Thor: Tales Of Asgard" really did nothing but tell a basic fantasy tale.

The animation is decent, the voice acting better, but the true disappointing feature of the film is its lacking creative vision. What made the "Thor" film such a cheesy but fun watch was how it seemingly blended fantasy, myth, and science fiction. This animated feature simply grounds itself in fantasy. Unwilling to move away from the basics and certainly shying away from the science fiction portions. Not the fun artistic direction that I wanted it to take.

It's not all that surprising that "Thor: Tales Of Asgard" is a rather bland watch - most of the Marvel cartoons have seemingly gone that direction. Even though the feature length "Thor" live action film wasn't great, this companion piece never even touches the fun and creative pizzazz it catered. Leaving a family oriented and fun cartoon, but rarely anything beyond that. Certainly worth only a rental.