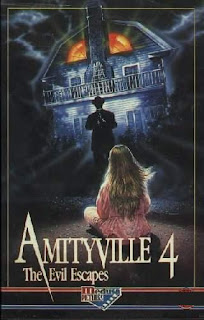 Amityville lives! Yes the infamous "Amityville Horror" returns to the screen... the small screen that is as the third entry "Amityville 3-D" ensured no more "Amityville" sequels would be graced with a theatrical release so yes this fourth film (also known as "Amityville 4: The Evil Escapes") was made for dreaded TV. Can "Amityville" live on with TV production limitations? Well...

The film starts off running with a rag-tag S.W.A.T.-like team of priests heading in to the infamous house like a military operation to take down the evil once and for all. Black goo and electronics go berserk as the "evil" escapes into a horrific looking lamp. The lamp is then bought by an unknowing victim (Patty Duke) and soon evil infects her household when the lamp convinces a little girl that, get this, it is spirit her dead father. Never thought I would see a little girl believe a piece of furniture is a relative!

"The Evil Escapes" marks the first sequel of many to come in which the plot revolves around a cursed object from the infamous house bringing poltergeists down upon their unsuspecting owners. The idea of new people moving into the cursed house was growing old fast (as shown in "Amityville 3-D") so this new approach is a refreshing twist but thanks to poor execution and script makes this entry a dud.

The TV productions values rear their ugly head at every turn as this film looks cheap and made on the quick. To be honest the film really resembles a long, drawn out episode of the "Friday the 13th" TV series in which each episode revolved around a different cursed object. Whereas the show had enough plot to go on for 45 minutes, this film drags it's poorly paced plot out for an hour and a half.

The "scares", if you can really call them that, only involve electrical appliances going amok including chainsaws, blenders and stoves. That's about it. There is also a humorous scene where a women cuts her finger on the cursed lamp and dies from infection. The problem with the scares is this film was made for prime-time TV so not much was allowed in terms of violence, blood and horror so this is strictly PG TV material here. Due to this the film also overall has a very hokey and cornball feel to it, mostly due to its shit production values and cheesy effects. The effect of a demonic face in the lamp bulb is laugh inducing and not-the-least bit 'scary.'

Continuity is also thrown out the window as eagle -eyed viewers will recall that the house EXPLODED at the end of "Part 3" yet here the house is, in all its creepy glory. Then again continuity was never major concern for the "Amityville" franchise as the errors would only continue to grow with each sequel.

"Amityville Horror: The Evil Escapes" was the first "Amityville" film I ever saw as a child and I embarrassingly admit it scared me.... then again I was only 6 when I saw it! Much like "Superman III" it's a horrible way to get your cherry broke by a franchise as it's so damn tame thanks to being made-for-TV. The ending is left open but the franchise would surprisingly get upgraded to direct-to-video releases after this and just forgot about this entry all together. VERY passable and only for "Amityville" completists.