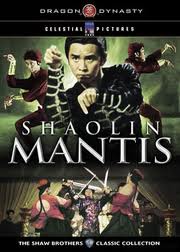 Director Lau Kar Leung may be known for some of his other films at great lengths (including "8-Diagram Pole Fighter") and his wickedly impressive fight choreography, "Shaolin Mantis" remains an underrated gem in the Shaw Brothers collection. It's a film that just shys from perfect, but takes some dramatic turns to raise the martial arts level of the film and give it weight. A move that makes "Shaolin Mantis" one of my personal favorites thus far in my collection.

Wei Fung (David Chiang), a man studied in both books and in martial arts, finds his family being held captive by the current dynasty. They will be killed unless he can infiltrate the Tien family and uncover their plot to overthrow the government. Wei Fung places himself as the new tutor of Chi-Chi (Huang Hsing-hsiu) the spoiled and martial arts savvy granddaughter of the head of the Tien family. When he is suspected of being a spy, Wei Fung must decide which of his families he will betray, his real family being held prisoner or his new family and new found love for Chi-Chi.

What makes "Shaolin Mantis" such a fantastic addition to any martial arts fan's collection is the combination of drama and plot to the obviously stellar fight choreography. David Chiang works some subtle magic with the lead role, but its the supporting cast that steals this film. Huang Hsing-hsiu starts off as an annoying character who grows on the audience as well as on our lead. Even the various 'villains' of the films - including the uncles and the grandfather - own the roles and give just enough characterization to their brief moments for weight of the plot to be added. This works as the first two-thirds of the film and builds a great drama and plot to finalize with the relatively relentless final act.

The final act owns too. When the fighting starts - its impressively choreographed, shot, and paced as our hero must fight his way out of the Tien house, train himself in a new mantis based style of kung fu, and fight his way back in for vengeance. Although I would have loved to see more of the fantastically crafted mantis fighting in the film (it really only appears in the final fight sans the rather pointless intro for the film), this finale is well executed and a great way to end the film.

If there was any complaints to have about "Shaolin Mantis", it would be that the plot is extensive enough and strong enough that it could have used another 20 minutes of build up. Instead of seeing our hero learn his new style in the final act to go back and throw down with the 'villains', it would have been nice to see it more in the middle of the film and this would have given more weight to some of the choices (like the oddly paced marriage that is rushed through in the film). Also the final "twist" of the film, in the final moments, is a solid idea, but oddly tacked onto the film that leaves it standing in a sort of purgatorial state of ambiguity for its last moment. Not a way to end such a well done film.

"Shaolin Mantis" may have its faults, with its pacing and odd ending, but the rest of the film is splendidly executed. It earns its audience with great characters and a standard, but well delivered plot. The fighting is stellar (particularly when the Mantis style comes to the screen) and the Shaw Brothers once again deliver a classic martial arts film that many will love and appreciate. A classic in any collection.