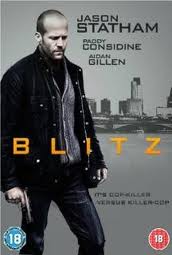 Jason Statham might be one of my favorite actors at this time, but let's just admit it...the films he is in aren't that great. Entertaining sure, but legitly good films? Hardly. This is one of the reasons that "Blitz" struck me as such a surprise...it's actually quite an effective thriller. Statham gives one of the best performances to date and despite a fairly bland approach to the pacing of the story, its effective in its telling and delivers up some solid suspense and impressive 'tough guy' moments for our lead.

Brant (Statham) is the kind of cop you hate to love to have on your team. He's brash, brutal, and tends to want to beat his way through most problems with his fists and a solid glass of alcohol. This is why he doesn't get along with the well put together new inspector Nash (Considine). When the two are charged with finding a new killer hellbent on taking cops to the grave, they must put aside their differences and use their strengths to capture this deranged killer before he gets to them first.

As I've stated time and time again, thrillers rarely find an original plot or script, but have to rely heavily on the execution to be successful. "Blitz" does this to some surprising success. Director Lester does an amiable job keeping the pacing up and the atmosphere thick with the south London vibe and he single handedly makes many of the rather by the numbers sequences click with well timed intensity. He takes many of the basic scenes to a higher level just with his visual execution.

This, ironically, is not the highlight of "Blitz". Turns out, its the acting and casting of the film. This is strange considering that Statham plays the same character he basically does in every film. He just happens to have enough subtlety added to his character and some great monologues to give that he rises above his normal routine. The supporting cast also seems impressively placed and performed. Considine delivers a great supporting and balancing act for Statham and Gillem steals the film with his often edgy and riveting villain. This takes the otherwise basic characters and dialogue to new levels to match Lester's vision.

Certainly "Blitz" never feels all that original and the rather obvious twist ending never really seems to give the audience that last thrill, but the execution on this British cops n robbers tale is stellar. The acting is well done and Lester does some impressive things with what he is given. This throws the film up and above its own means. Mostly for Statham fans, but those looking for a great little rental should also check it out.