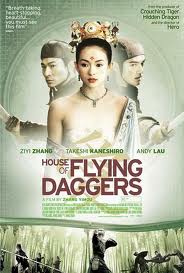 Although my love of the film "Hero" with Jet Li knows no bounds, it has taken quite some time for me to finally get around to "House Of Flying Daggers" despite having a stunning cast. Time was irrelevant though as the film's execution didn't lose value. Zhang Yimou strikes again with another solid directorial effort that utilizes the cast and settings to its full advantage, even if the script leaves some to be desired for originality and occasional lack of logic.

Jin (Kaneshiro) and Leo (Lau) are two deputies charged with finding the leader of the elusive and renegade House Of Flying Daggers. When word that a rogue female member of the group could be found at a local brothel, the two friends and swordsmen devise a plan to earn a hefty reward by following her back to the group. When Jin goes undercover with Mei (Ziyi) though, he finds himself quickly falling for the unique and well trained woman, but alliances have been made and for him to follow his heart he may have to betray his entire life.

"House Of Flying Daggers" rocks and rolls with a brilliant visual style. The wicked use of color eats away through the film (as is with all of Yimou) and his use of setting and historical coloring/texture for the film is stunningly well crafted. The overpowering green sequences in the bamboo forests are beautiful and the finale battle in the blizzard has a great stark contrast. This is the obvious highlight for this film and biggest part to chew on. It also helps that Yimou brought in a stunning cast (including Kaneshiro and Lau) who light up the screen with their subtle and often deep expressions of their torn lives. This combination of cast and director is the true highlight for this film.

If the script was just slightly stronger, this easily would have been a five out of five. Not that the script is bad, in fact, it starts off with such force that it almost carried it through the entire film. The dialogue is killer and many of the scenes are so strong that it's hard to think that any would falter, but the latter half of the film does. It builds so many characters so strongly in the first half that when they start twisting the well built love and war story it seems to feel almost a bit forced and from there it starts to lose quite a bit of logic. It almost gets funny with the amount of "you're not who you say you are" moments and the relatively awkward ending and its sudden weather change and final moment. Symbolically it works, but pulling back it does feel a bit forced a rather mismatched. Not the way one would want to end such a strong film.

"House Of Flying Daggers" is another success for Yimou and his dynamic visual style and strong film builds even if it does slightly falter towards the end. The cast is stunning, the visuals overwhelming, and the martial art sequences a solid blend of realistic fighting and flighty fantastical elements. As a fan of this style, "Flying Daggers" hits home like a knife to the heart and certainly entertains to its full extent.

Written By Matt Reifschneider
Posted by DarkReif at 9:09 AM