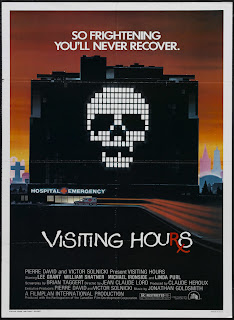 A slasher in a hospital setting is a fabulous environment for a stalk and stab flick. "Halloween II" proved it so Canadian producers Pierre David and Claude Héroux decided to follow suit and make their own brand of 'killer in a hospital' film. Even with a good budget, eye catching poster artwork and a solid cast "Vistiting Hours" still manages to disappoint this hardcore horror fanatic, and many others, due to not going the extra distance to truly make a memorable example of the subgenre.

The beautiful Lee Grant is a TV newscaster that's had enough of violence against women and makes her opinion known on national television. This attracts the attention of a crazed lunatic (Michael Ironside) who gets his kicks from hurting and killing lovely ladies. After a failed attempt to kill her in her home, he decides to follower to the hospital where he fails again, again... and again. Seriously, how many chances does this psycho need?

What disappoints most horror fans is that this film fails to meet expectations that the entire picture is going to to take place in the hospital with the killer stalking his victims. "Halloween II" this is not. Our killer visits the hospital on numerous occasions (mostly resulting in failed attempts to kill our heroine) and he almost always manages to escape to scare prostitutes and stalk beautiful nurses in their homes.

To be honest I would have preferred it to take place more within the hospital walls as it does get a little ludicrous with the number of times killer attempts to murder our heroine and then gets away. I swear this hospital has the SHITTIEST security of all time! The film also fails to go the extra mile when it comes to suspense and, of course, on screen gore. I'm not asking for both... just one or the other and "Vistiting Hours" fails on these two basic ingredients that are a must in the Slasher genre.

The cast is TOP NOTCH for such a genre film. Lee Grant is a fabulous actress (an academy award winner) and she brings a sense of grace to a genre that is usually littered with amateur actors. Michael Ironside (one of my all time favorite character actors) is majorly creepy as our psychopath. He always plays great villains and he got this role for his memorable performance in "Scanners", which was produced by the same fellas behind this. Hell we are even given a hammed down appearance by William Shatner. I never thought I would see Captain Kirk in a slasher film, that's for sure.

The solid cast makes "Visiting Hours" worth visiting. It just lacks some of the essential ingredients that slasher fans crave, notably suspense and/or blood. The plot can get a wee bit ridiculous at times and the final confrontation with our killer is disappointing but horror fans have seen plenty worse slasher plots, trust me. "Visiting Hours" is definitely worth a onetime watch.