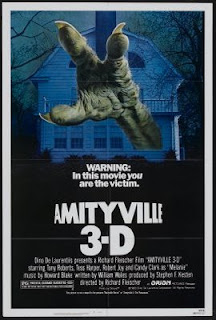 Dino De Laurentiis jumped on the trend for third films in a franchise at the time as this third "Amityville" film (released overseas as “Amityville III: The Demon”) followed the footsteps of “Jaws III” and “Friday the 13th Part III” and got released in 3-D. Icky Poo! Not only is the 3-D gimmicks predictably bad, but so is the tired, cliché haunted house plot which is the first in the series to be completely "fictional" based.

Well we have an arrogant, no shit taking skeptic (looking like the mixture of the Brady Bunch father and Will Ferrell) who unwisely decides to buy the notorious Amityville house, ignoring the stories and past history. Unlucky for him! Soon people start falling like flies around him.

This character that buys the house is so damn annoying. I mean people die around him left and right and he still refuses to leave. Skeptic or not... something is going on in the house SO GET YOUR FUCKING ASS OUTTA THERE!

The film introduces an aspect of a "Demon" (mentioned in the subtitle for the foreign release) but it's only vaguely hit upon. A women takes a picture, develops it and sees a demon head in the corner of the photo. Later we see a demon pop out of a well in the basement (so when did a well become an integral part of the plot? The continuity is shit in the series!) and humorously blows fire, melting a paranormal investigators face.

Dino De Laurentiis, in an effort to liven this tired sequel up, hired veteran director Richard Fleischer. Sadly here he seems as bored with the subject matter as the viewers are. Nothing exciting goes on... just the typical swarm of flies, black goo and ominous feelings visitors get. The only thing really “new” added to the plot is the gimmicky 3-D aspect but that is even done poorly. Watch out for the flies flying off the screen!

Typical with 3-D films of the era the 2D versions on home video are muddy and murky. What’s even more head-ache inducing is distributors never retitled it for home video releases and kept the “Amityville 3-D” title. The original Vestron Video release and the newer MGM DVD are both guilty of this so many people who rented or purchased the film expect it to be in 3D. I even know people who have boughten the film thinking it was a 3D version of the original "Amityville Horror". Lionsgate was even smart enough to retitle "Saw 3D" "Saw: The Final Chapter" on home video to avoid confusion.

Even with all these annoyances, there is still one that takes the cake. The filmmakers decide to go against the R ratings of the original films and opt for a PG rating, no doubt wanting to sucker in a younger crowd wanting to see shit pop out of the screen at 'em. Nothing like castrating your R-rated haunted house franchise huh Laurentiis?

"Amityville 3-D", despite having a veteran director and an opportunity for a script free of 'actual happenings', ends up an absolute waste. This could have been a scary good time and instead it's a bore intermittent with a few unintentional laughs. It's so bad that it actually almost killed the franchise and marked the final entry into the series to see a theatrical release. If you must see it then keep an eye out for a very young Meg Ryan in an early role... it's one of the few things to keep you watching.