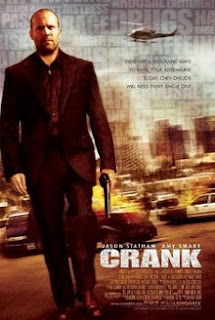 The modern age of action films is one of shaky cameras and all too serious motives. What happened to the days of needless violence, cheesy one liners, and ridiculous concepts? It's just not near as popular as it once was, but thanks to a few new action stars like Jason Statham - the trend is coming back. And thanks to films like "Crank", the modern style is taking a turn for the more ridiculous and straight back to what made those crappy action films so much fun to watch.

Chev Chelios (Statham) awakes to find he's been poisoned with some Chinese shit. He only has about an hour to live and his only way to slow the poison in his veins is to keep his adrenaline up. Between now and his eventual death, Chev must find the man who poisoned him, let his girlfriend Eve (Smart) know that he is not a video game programmer but a killer for hire, and get revenge on all those who betrayed him. Sounds like he's going to need to crank it up just to get it all done.

Neveldine and Taylor (our two directors for the film) certainly keep the tongue firmly planted into cheek for "Crank". Through its run time, they throw everything and the kitchen sink into this film. We have gang battles, gun fights, public displays of sex, a car chase through a mall - one of the highlights of the film, cross-dressers, endless running, and of course a helicopter fist fight. Honestly, just as the plot would indicate - this film never stops. Ever. It's as if its on coke and the pacing follows that.

The style seems to follow that same drugged out feeling. The obvious motif is that Neveldine and Taylor wanted it to almost feel like a video game and many of the choices coincide with this concept. The use of Google Maps to jump to different settings, the odd way it's edited, words play across the screen as momentary close captioning for certain characters, and awkward sound effects all make this film like a super offensive cartoon. Ironically, making it so damn enjoyable its hilarious. Who knew random sound effects and cartoonish effects would work so well in such an offensive film?

That being said, "Crank" is not for everyone. Either you get it or you don't. I, for one, had a riot with the film. It's a perfect balance of crazy, insane, and hilarious all rolled in a charismatic package with Jason Statham as icing on the top. It's easily one of the best modern action films and one worth watching just for the spastic experience. Blood Brothers approved!