Pirates Of The Caribbean: On Stranger Tides - 3.5/5 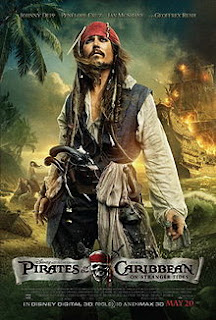 Although the "Pirates" franchise may have started off as a surprisingly solid fun action film, but the franchise quickly tanked due to its new focus on being too epic for its britches. This is the main reason that it took me so long to finally watch this fourth entry into the series even if it is one of the all time biggest money makers world wide at the time of this review. To my surprise though, "On Stranger Tides" goes back to what worked in the original film and simplifies the story down quite a bit and just becomes a fun ride again - no pun intended - much to its own benefit.

Jack Sparrow (Depp) finds himself, once again, bewildered at the news he is hearing. Turns out he is getting a crew together to go find The Fountain Of Youth before the Spanish can get there, even though he doesn't have a ship. This leads the scavenger pirate on a new quest to discover who is out to find the Fountain Of Youth and for a reason why he is so important to this journey. Odd friends and villains find themselves entangled in the mystery too as the elusive and frightening Black Beard (McShane) seems to be behind the entire mess.

It's hard for me to claim that "On Stranger Tides" is a good film (as it is for any of the "Pirates" films). The characters a bit depthless when it comes to character arcs, sans the mermaid and clergyman sub plot which is horribly underdeveloped and left to float off by the end, and the film still tries to pack far too many concepts and plot lines into its two hour run time. This over crowding of characters/plot lends the film to brush over many of its more serious moments of development in the ideology of pushing it forward to get it all in. This is the same problem that has plagued the series since film number two and although "On Stranger Tides" does effectively fix some of the flaws of its predecessors, its still not quite enough to jack it up to the next level.

That being said, this film is really fucking entertaining. Pushing out the Bloom/Knightley overplayed characters and plots only shaved off some of the dying story and even though the character of Sparrow might seem gimmicky, watching him for two hours leaves a smile on the face. Yeah, his character is weakly developed and rarely goes anyplace in this film, but he's got a lot of great lines in the film and his outrageous escapist moments are fascinating to watch. Partner this with some killer action set pieces including sword fights, mutinies, and an unforgettable attempt to capture some pissed off mermaids and "On Stranger Tides" really works the elements that make this series such a blast to watch.

Although this fourth entry still isn't a great film as far as serious moments and impactful themes go, its a return to fantastical form that entertains even more so than its two previous entries. All the greatest characters return (weeding out the baggage) and the addition of even more ridiculous people - including a fabulous performance from Blackbeard as the film's villain - sells the film more so than it should have. Not great, but a blast to watch nonetheless.