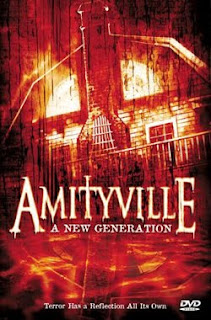 Drunk off the surprise video success of "Amityville 1992", the same producers and writers quickly got their shit together to pump out another similarly themed "Amityville" film as quickly as possible. Well much like "Halloween 5" and "A Nightmare on Elm Street 5" the final results of this seventh entry show the flaws of the quick production not to mention the tired blood of an overlong franchise.

Whereas the fourth film had a possessed lamp and the sixth film had a cursed clock, this entry has a cursed mirror. Yes... a damn mirror. Originally having a cursed item from the iconic Amityville house spreading it's evil to new households was a novel idea but this third time around it's getting a little ridiculous. How many cursed items can there be... really? Well a young, starving artist is given a ghastly mirror from a bum on the street (don't ask) and of course it comes from the Amityville house and soon all of his artistic friends start dying grisly deaths. Can he defeat the evil mirror before he starts blowing everyone away with a shotgun?

Unlike many of the other sequels, at least the writers here try to tie the plot more in with the first two films by having our main character being the son of young Dafeo lad who murdered his whole family in "Amityville II". Still, with this story connection, comes a SHITLOAD of plot holes. First of all how did Dafeo have a son unless it was with his sister (if you've seen "Amityville II" then you know exactly the creepy scene I'm talking about) but this is not the case. Not only did he have a son but he was married! It's amazing all he got done in-between getting exorcised by a priest and then shipped off to the looney bin. Ridiculous plot holes like this makes me wonder what the real Ronald Dafeo would think if he were allowed to see some of these absurd sequels.

The cast is made of some truly colorful actors but it's not the main actors that are the highlights. Our main characters are rather forgettable Melrose Place types but it's Richard Roundtree, David Naughton and Terry "Stepfather" O'Quinn. Naughton and Roundtree are underused and deserve to be in much better films than "Amityville 7" but they make an impression. Roundtree especially as a bizarre artist that makes, get this, a recliner in front of a television equipped with a shotgun that's programmed to go off sometime before the year 2000 (remember, this was made in 1993). That is single handedly the most badass and most fucking stupid art project I have ever heard of! O'Quinn is solid as the nosey cop who knows something isn't quite right in the apartment building that is home of the Amityville mirror.

The part that doesn't make this entry as fun as it's predecessor is the lack of Tony Randall. Randall had just the right touch of over-the-topness to make "Amityville 1992" to be as entertaining and as visually stimulating as a "Nightmare on Elm Street" sequel. John Murlowski takes this sequel more seriously yet at the same time has less visual flare making this far from climbing out of it's direct-to-video limitations.

The plot is far too similar to the last entry and the director isn't equipped with the right weapons to make this a truly entertaining "Amityville" film. The colorful secondary characters makes it worth watching but the series is definitely overstaying it's welcome. Still one more sequel would come in the form of "Amityville: Dollhouse" before the series would be restarted with a remake.