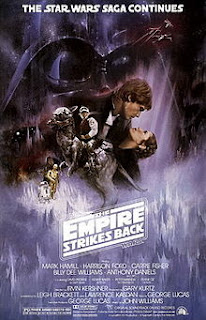 It's hard for me to say this, but "The Empire Strikes Back" is a film that tears me a little inside. It's handedly the best of the series thus far (including the prequel trilogy), but on its own it suffers from being the middle of an obviously attempt at a trilogy. Luckily, director Irvin Kershner works some solid magic with the film and more confident actors make it a slight step up from the original...err...fourth entry. Whatever. This one is the best because it kicks ass with some great action sequences and utilizes its illogical leaps to an effectiveness that momentarily makes one think that they logical. Now that's industrial light and magic!

Luke Skywalker (Hamill) and his new found friends Han (Ford) and Leia (Fisher) are celebrating their victory against the Empire...by hiding in the Hoth system buried in the ice. When Darth Vader finally gets a tab on their location, suddenly the rebels and our heroes are on the run. Han, Leia, and Chewy head for the safety of a cloud city run by Han's friend Lando (Williams) and Luke heads off to the damn swamp to study being a Jedi with master Yoda. Secrets will be uncovered and Luke's past will come to bite the hand that feeds (pun intended), but can our heroes continue to outrun the Empire?

My love/hate relationship with "The Empire Strikes Back" stems from its rather awkwardly built pacing and plot. It truly assumes that you have see "A New Hope" as it never keys the newbies into what happened before. You are literally throw into the chaos from minute one as you arrive in Hoth. From there it never really lets up. It blasts at light speed through various places and never really stops to delve into character work until at least half way through the play time if not further in. If you haven't seen the first one...err...fourth entry, then don't bother. You will be left playing in the snow. And jungle. And the clouds. And an asteroid worm. The film even ends on a rather odd note as its an obvious 'to be continued' moment for the third entry...err...sixth entry. It's as if you are watching the middle section of a film itself. Not something that works for a film on its own - usually.

This is also what makes "The Empire Strikes Back" such a fluke of chance. Despite its odd structures and poor pacing - the movie works. It's an entertainment roller coaster from minute one. We get giant fucking walking robots that look like steel camels, we get muppets with mind power, space yetis, laser fights, giant worms, and light saber duels. It's what I always wanted for Christmas wrapped up in better directing and with better acting! There might not be as much character development as one would hope, but the material that is there is ten times in quality as the last entry and its far more effective. There are even times when Hamill looks like a real actor...not always, but there are moments. Kershner works this movie and fills it with more thrills and spills and makes it all work surprisingly well.

Even though some of the dialogue is still poor and many things continue to be rushed (our awkward love triangle for example), "The Empire Strikes Back" is an efficient entertainment machine that fills every minute with excitement and credible thought. Still not a great film, but easily the best of the series.

DARTH VADER'S BAD ASS MOMENT OF THE FILM: My first thought had to go to the initial invisible choking instance in the film. I mean, the shiny helmeted guy chokes a guy to death with his mind through a fucking TV screen. They aren't even in the same room! But alas, the invisible choke was his bad ass moment for the last film. So for "Empire", the Darth Vader bad ass moment of the film goes to his encounter with Han Solo in the cloud city. Han opens the door. It's an all white room and there is Vader...black as his soul. Not only that, but he's sitting waiting for them nonchalantly. That's not it though. Han fires his laser gun and Vader stops it with his fucking palm. Let me repeat that. STOPS A LASER BLAST WITH HIS PALM. Doesn't even flinch. Not that we can see anyway. He takes a blast to the chest and then stops a shot with his palm. That. Is. Bad. Ass.