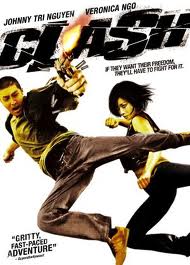 Although the Vietnamese film industry has yet to really take off in a world wide market sense, the on screen charisma and sheer martial arts power of Johnny Nguyen are working towards that goal. His emergence with "The Rebel" was a strong one, but his work on "Clash" will throw him into a bit more spot light with its more modern style and combination of fist fighting and bullet flying action. Not a great film as it suffers some vital flaws of plot and execution. It's entertaining though.

A young woman (Ngo Thanh Van) is desperate to retrieve her kidnapped daughter from a vicious crime lord. To do so, she has been tasked to retrieve a lap top in any manner possible. She hires a group of mercenaries to help with the task, but only one of them (Johnny Nguyen) stands out as a strong enough candidate to truly help her even if their motivations are from opposite sides of the spectrum.

There are a lot of fun and exciting aspects to "Clash" that say good things about the direction  of the film. There is a distinct and viable John Woo style to the film with its well paced action scene flow and the use of of classic martial arts motifs done with some flash and bang gun fights and explosions. This is the biggest highlight of "Clash". The fights are brutal and well choreographed with some nice high flying leg work from Nguyen and Ngo and the quick pacing of the film benefits its sometimes lacking character work.

The film suffers from its rather generic story line though and the editing of the film can be down right annoying with its modern flare and sometimes over the top attempts at being slick. These are more or less fairly easy to over look for the films better qualities. The character flaws, for example, with the lead male role are drowned in Nguyen's mysterious performance which won't earn him any awards, but certainly adds a nice subtle tone to the film that many of the more cartoonish supporting cast and odd character back story revelations hinder.

In the end though, "Clash" rings true as a solid modern style action/martial arts film with some great stunt work and fight sequences that just happens to be built on a rather cliche and unbalanced script. The performances are hit and miss and the awkward edits make the Woo style of the directing a bit harder to digest than it should have been. Still it's a fun action flick that punches in many of the right places.

Written By Matt Reifschneider
You know you want to see "Clash", whether you agree with me or not. That's why Blood Brothers make it easy for you. Just click the link below and buy now! Help support us in the mean time!
Posted by DarkReif
Email ThisBlogThis!Share to TwitterShare to FacebookShare to Pinterest
Labels: Action / Adventure, Indomina Releasing, Martial Arts