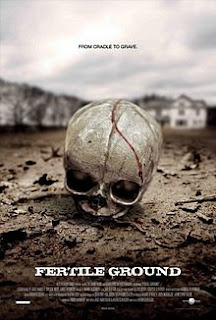 My luck with the After Dark Originals had be decent. Not any great ones, but only one stinker (thanks "Banshee"). So I went into "Fertile Ground" with a hop and skip in my step expecting a little clever haunted house flick. What I ended up watching was an overly redundant and excruciatingly slow film that never went anywhere, let alone anywhere original. It had some well executed moments, but they were far too few and far too short to really save this film for drowning in its own melodrama.

Emily (Haily) and Nate Weaver (Harold) have a great marriage, but a recent miscarriage has kicked Emily into a depression. So the two move out to Nate's family home in the country to start a new life. Unfortunately, the ghosts of this haunted house keep appearing to the recovering wife and an unexpected new pregnancy makes things a whole lot more complicated. Even Nate seems to be acting differently...

Well what do you know...its like a less scary version of "The Amityville Horror" with less to be concerned about. That is not a compliment. The movie builds nicely in the beginning, giving us two very believable characters to put our faith in. It sets up the move and the general mindset well and gives us a great creepy farm home and isolated setting for a great haunted house movie. Then it decides to go nowhere and go nowhere fast.

The characters take ridiculous leaps of personality, the tension is only effective in moments, and worst of all - the film never scares. For a haunted house movie there is no jump scares and rarely any creepy things that happen at all. When they do, they are nonsensical and make the audience confused rather than scared. The actors are hit and miss and director Gierasch seems lost with what to do with the uneventful plot elements. He tries to build suspense with some great shots of the house, but after the first couple failures at giving us the punch to the build we just cease to care. Apathy is the biggest enemy of great suspense and the audience falls under its wicked spell.

There is some potential to the work here in "Fertile Ground", but the by-the-numbers "Amityville" knock off plot and the lacking scares ends up boring the audience to death rather than scaring them that way. Disappointment reigns here for this After Dark Original.