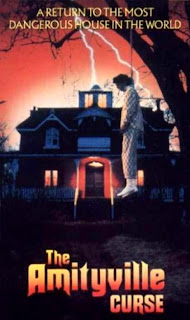 Well after the television made venture with "Amityville Horror: The Evil Escapes", filmmakers this time head straight-for-video with this fifth entry into the "Amityville" franchise. Well direct-to-video is a step in the right direction in that the production values will be better. But does that necessarily mean the film will be better? Oh that's a big hell no!

A couple decide to buy a house in Amityville with an 'evil' reputation in that a priest that lived there was murdered and the person wrongly blamed for his death hung himself. Well a skeptic husband ignores the stories and ignores his psychic wife (what an ass!) and invites a handful of friends to the house to fix it up and predictably some spooks start occurring.

Looking at the poster artwork horror fans familiar with the franchise will notice one glaring thing missing.... the fucking Amityville house! You know, the house with the eye windows peaking out from behind the chimney... yea nowhere to be fucking found in this movie. How the fuck can you make an "Amityville" film without even a quick glimpse at the iconic house? It's like making a "Halloween" film without Michael Myers...errrr....bad example but you get what I mean. Sure the forth film and sequels to come didn't all take place within the house but they at least featured it!

What's even more bizarre is that it is never made clear if this is supposed to be the same haunted house or not. I assumed the filmmakers were not allowed to film at the infamous house thus were forced to use a different location but I even question that. My guess is that it's supposed to be a different haunted house that just happens to take place in the town of Amityville. If it's supposed to be the same house then why would a priest move there? There's so many unanswered questions to the continuity that it's enough to make any horror fan that follows the series to burst an eyeball.

The most headache educing aspect of this film is the ridiculous plot twist at the end.
Posted by Cronosmantas
Email ThisBlogThis!Share to TwitterShare to FacebookShare to Pinterest
Labels: Horror