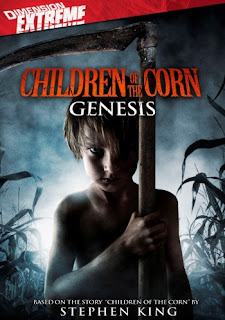 We all thought the horror was dead. It's been over ten years since the last entry into Dimension's overlong "Children of the Corn" franchise infected DVD shelves and with the recent TV remake it was safe to assume that the coffin was nailed shut for good. If anymore sequels were to emerge one would assume they would be a follow-ups to the remake. WRONG! Remember horror never dies, especially BAD horror and despite a remake we horror fans are 'graced' with the eighth entry into the original franchise run. Being a franchise whore I was destined to buy this trash though I despised most of the other films in the series so here I go again, reviewing another crummy "Children of the Corn" film.

Well "Korn Kids 8" (a title that my brother likes to call this film) has a young couple break down in the middle of no-fucking-where. Whose bright idea was it to take a desolate gravel road without telling a soul where they were? Needing help (of course they are out of cell phone range... something that has to be explained in every modern horror film) they knock on the door of religious nut Billy Drago and his Russian mail order bride. Predictably he, or more like "it", won't let them leave as the noisy wife discovers a child being held captive and a supernatural force wants the fetus growing in her belly.

The budget is EXTREMELY low so the filmmakers were forced to downsize their plot. Hence why the film takes place in California as opposed to the mid west and why there are only 8 people in the entire cast. You guessed it the production values are shoestring but director Joel Soisson does what he can to utilize the little money he has to work with (numerous crashes in the climax involving a car carrier semi was impressive though for such a low budget) but still the film is nothing that great to look at from a stylistic point of view.

The problem with this film, as with most of the other Korn Kids sequels, is the fucking plot. First of all the title has the word "Children" in it and to be honest there are hardly any children in the film so don't expect a mob of crazed murderous kids stalking our sinful adults. That I can get by as by the eighth entry into a franchise the plot needs to be a little fresh and different. The problem I have is that the supernatural element makes no fucking sense and the explanation our priest gives for keeping a child captive is mind boggling. To top it off the plot drags on and on with not much going on so I found myself almost snoozing at some points.

What kept me going, trudging through this half dead corn field was the acting as the cast is actually decent here and the acting is surprisingly good for direct-to-video fair. Of course the offbeat Billy Drago steals the show as he plays, what else, a fucking eccentric weirdo like he plays in every other film. It may be nothing new for Drago but he plays these weirdos so damn well that one can't help to break a smile every time his name pops up into film credits.

To be honest "Children of the Corn 8" was a hair better than I thought it was going to be thanks to the decent acting and cast. I mean this is from the director of "Pulse 2" & "3" so I was expecting nothing but complete dog shit. Other than the cast the plot is just nonsensical and the budget too low to make this pointless film nothing more than another forgettable direct-to-video sequel. Even though the TV remake was worse than having a corn cob shoved up the ass this eighth entry into the original franchise proved the original series wasn't worth plowing up again.