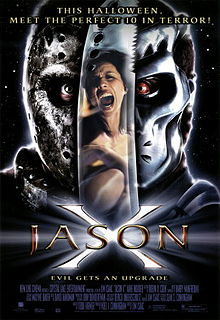 After the sheer derangement of "Jason Goes To Hell", its hard to imagine that this franchise would have survived. It almost didn't. Thanks to a time period as everyone held their bated breath for a "Freddy Vs Jason" film to be released, they decided to move ahead with a tenth entry. How do you do that after you kill Jason once and for all to send him to hell? I don't know. This movie just ignores the last entry. More or less for the better, even if this entry to the "Friday The 13th" franchise struggles to be better.

Jason Voorhees (Hodder) has been captured. He is to be studied for his regenerative abilities. Unfortunately, during his transport the supernatural serial killer breaks free only to be frozen in a cryo-tube with Dr. Rowan (Doig). Hundreds of years into the future, the two are thawed out as archeological finds. Now Jason is loose on a space ship headed for Earth 2 and the young college aged crew (....now that's a stretch) must find a way to end his little trip early.

That's right. Jason Fucking Voorhees in space. At least, its Jason slaughtering people in ridiculous ways with whole new gimmicks instead of a body leaping parasite that's supposedly Jason. To this effect, "Jason X" works the right formula. Bunch of rowdy kids and inept adults slaughtered in a confined area by a homicidal killer with a machete. The plot is stupid, the acting is poor, the special effects look like a SyFy weekend movie, and the directing is mediocre at best. Honestly, "Jason X" is just a rather poorly executed entry for this franchise.

Of course, just looking at the synopsis of "Jason X" should tell you that this is going to be a trial of will power to get through. Yet, there is something especially entertaining about it. Perhaps its just so far out there that even the film makers can't take it seriously (some of those lines of dialogue couldn't be written that bad unless it was on purpose) and the style of the movie is so far tongue in cheek that its hard not to laugh. This time though the film is laughing with you...which is a nice change of pace. Not to mention the concept does allow for some awesome death scenes (including a frozen ice face smash and atmospheric burn) which is fun at times.

Despite being quite an awful film, let me admit that I happen to enjoy this film. It's bad in all the right ways for an entertaining watch. Yeah, none of it makes sense and most of the execution is nails-on-chalkboard irritating, but there is a certain charm to how bad it is. Something that makes it worth the watch despite how much it tries to ruin it.