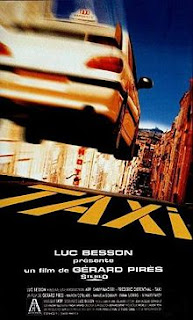 Although Luc Besson might be known for his kick ass films like "Taken", "The Transporter", or "La Femme Nikita", he does have an odd humorous side to his film writing output that includes films like "Taxi". Although not the atrocity to film that was its remake in 2004 with Jimmy Fallon and Queen Latifah, this "Taxi" is a smarmy paced and high chemistry riddled buddy cop formula film that really utilizes its quirky characters for some great laughs and some fun car chase sequences. Perhaps not the laugh-a-minute ride I kept wanting it to be, "Taxi" does a lot of things right and comes across as a great quirky film worth the watch.

A renowned pizza delivery man Daniel (Naceri) has finally made his dream come true. His taxi license is finally passed through and with his maxed out home crafted taxi car he is going to cater his need for driving thrills. Too bad a cop (Diefenthal) catches him in the act and forces him to help with a bank heist group. Now Daniel must help capture these criminals before he loses his taxi license forever.

The story is cheesy, I know, but the chemistry between our two leads is on screen gold and is the element that carries "Taxi" through most of its play time. The story is basic and seemingly goes through the motions, but the characters are fun enough to really make it worth. Not to mention that there is enough caricature driven supporting characters (the guy who never knocks is the best) that it really creates a great dynamic for the film that makes it work even if the story tries too hard to be clever when it really isn't.

As a bonus, the driving sequences are surprisingly fun and solid despite the obviously limited budget of the film. The shootout in the street between the cops grabs just the right amount of outrageousness to make it a humorous action sequence and "Taxi" does a decent job at performing this balance through out the film. Although I would have liked the finale to be stronger when it comes to being an action focused sequence (sometimes I wondered if Luc Besson really wrote this by the finale), it works for what it is.

Although "Taxi" wasn't quite the hilarious throw down of action I expected it to be, particularly from Besson, it still carried a fun chemistry with its quirky characters and rather well paced story. Not all that original, even for a buddy cop film, but it works for what it is and does it effectively. It perks the curiosity just enough to make the franchise a must see in my collection. Looking forward to see if "Taxi 2" pushes it even further.