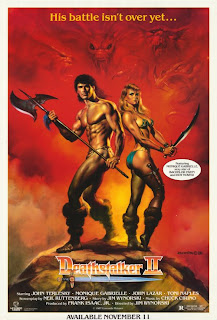 I might be mistaken but I highly doubt they made "Deathstalker II" due to popular demand but needless to say part 1 must have made enough money in video rentals to warrant a sequel. Though I love the original film for what it is (a delightfully awful Sword & Sorcery romp) I have to respect the direction that director / screenwriter Jim Wyrnorski took this sequel. Where-as the first film took itself seriously, Wyrnorski decides to poke fun at the low budget sword & sorcery film with this deliciously funny semi-spoof.

Deathstalker (this time portrayed by John Terlesky) with the help of a mega-hot princess must defeat an evil wizard. Hey, what else did you expect?

Like the first film, "Deathstalker II" was originally written to be serious but tongue-in-cheek schlock director Jim Wyrnorski saw the first film and read the script and new there is no way such drivel could be made seriously without becoming a laughing stock. The night before shooting began, he completely rewrote the script to be a semi spoof of the ridiculous sword & sorcery genre.
This new approach is evident from the opening pre-title sequence when our hero of the title escapes an evil vixen with here yelling to the screen "I will have my revenge and Deathstalker too" before the title "Deathstalker II" comes burning onto the screen accompanied by a screaming synthesizer score. This my friend is the intro to a hilarious, spoofy good time!
Wynoroski loads his script up with silly, self aware dialogue. Example: "Deathstalker, is that your first or last name?" He even takes a little cartoon approach in some scenes, where our heroin sneaks around a castle and appears in the same shot coming out from behind multiple walls. It's completely Scooby Doo! The film finally goes completely bonkers when Wynorkski has our title hero actually fight a women in a boxing ring. Seriously what-the-hell?
Just because the film has a spoofy, funny tone to it, Wyrnorski still delivers the goods when it comes to violence and nudity so to answer everyone's question this is NOT a family friendly Deathstalker film. Hell this rivals the number of boobies we saw in the original... and that's a true feat! Hands down actress Monique Gabrielle has the best set of knockers I have ever seen! Yummy!

John Terlesky is given free reign to completely have fun in the role as Deathstalker. Despite the name this is NOT the same guy that Richard Hill portrayed the first time around. Instead of being a mostly silent barbarian brute raping and killing across the countryside, this Deathstalker is a young, cocky and mouthy adventurer and Terlesky plays the role self aware, almost like he knows he's acting in a bad sword-and-sorcery sequel. I had a ball with his performance.

The production values are shit as expected and much of the acting is head-ache inducing, but the spoofy approach to the film makes all this much more stomachable. I enjoyed "Deathstalker II" immensely... just don't expect a serious sequel. The director and all the actors had fun making this silly film and that sense of festivity emanates off the screen and the audience can't help but be sucked into the buffoonery. What can a say other than "Deathstalker II" is real treat.