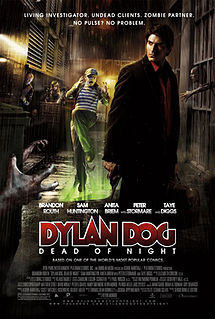 After being captivated by "Cemetery Man" and its horror/comedy brilliance, my research about the film led me to the recently released "Dylan Dog" - whose concept was inspired by a comic from the same writer. Although the rotten reviews had originally spewed in over this horror/comedy loosely based on the comic, the saving grace for the film is probably the fact that I never read the comic. Without that comparison in mind, I found "Dylan Dog" to be a quirky and fun little jaunt into the supernatural detective film, even if it was never all that original. It's fun and certainly has some well executed highlighted moments, but never touches the shine that "Cemetery Man" left in the same conceptual areas.

Dylan Dog (Routh) has been a retired 'undead detective' since his lady love found her way to the other side of death at the hands of some seriously pissed off vampires. His new detective agency and quirky partner Marcus (Huntington) keeps him busy and out of the business of vampires, werewolves, and zombies. His latest client insists her father was killed by a werewolf and when his partner Marcus succumbs to sudden death followed by eternal life as a zombie (still working as his partner mind you), Dylan seems forced back into the underworld to solve a case that just might end the world.

One aspect that helped me enjoy "Dylan Dog" was my insanely low expectations of the film. In the U.S. it was quickly crapped on by critics and audiences, where its fleeting existence in theaters rushed it out to home video where it floated in poor marketed territory for far too long. The film didn't deserve that bad of press, but it got it. Most of the criticisms can be legit for the film though, I must admit. Is it original? No. Is it well executed? At times, but it is Munroe's first live film, so he gets the benefit of the doubt here. Is the script cliche and weak? Very much so through most of the film. In this sense, I fully agree with the harsh spats of other critics. I'm sure if I was an avid fan of the comic I would be right with them too.

Luckily, I am not. So "Dylan Dog" was a new experience for me and even with its relatively well worn ideas and rather by the numbers script approaches to being clever, I was charmed by its quirky attack at the subject matter. Routh works well as the title character, even if his backing story is a bit underdeveloped, but his chemistry with Huntington is well worth the watch. Huntington steals practically every scene he is in and highlights the film with his adaptive zombie state sub plot (the "I'm a zombie" support group being more than a great concept that they should have run with). Even some of the dialogue and Dylan narration has some hilarious moments that work the concept to its heels (particularly with Dylan and Marcus).

In the end, I enjoyed the film more than it was as a 'good' film. The execution is shaky from Munroe who is obviously an amateur with live action and making the action sequences work like they should, but the charm of its concept and some very funny sequences carry over many of its faults. It might not be a great kick off for a film version of "Dylan Dog", but my hopes go to franchising the film further as it can be made better and the concept is strong enough to carry it out.