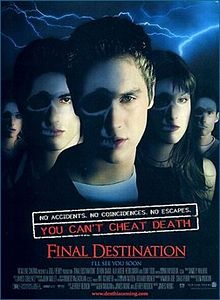 With a return to form that "Final Destination 5" embraced, it was time to go back to the beginning of this franchise for Blood Brothers. This kick off the long running and gimmicky horror franchise is far better than the sequels for it would indicate. For the time it was a clever twist on the teen 'slasher' craze that was working its way through the mainstream and despite it being a decade later, the film holds up surprisingly well with some clever ideas and wicked pacing.

Alex (Sawa) and his fellow seniors are about to take the trip of their lives to France. A feeling of dread builds throughout the day and when a vision of their plane exploding sends him over the edge, he begs for the people on the plane to get off forcing himself and a handful of his classmates to be kicked off the flight. Seconds later the plane does explode. Now Alex is convinced he accidentally cheated death and that death will come for him and his friends - taking back what was rightfully cheated. Can Alex figure out death's plan before the rest of his living classmates bite the dust?

It's not surprising that this film was originally written to be an "X-Files" episode. It distinctly crafts an almost "Twilight Zone" or "X-Files" vibe to itself with who the story plays out as a supernatural mystery. This is the biggest redeeming quality about the film. It's relatively weak budget and hit or miss casting make it work, but the cleverness of the writing hits it home. It plays off as a 90s teeny slasher film with more thought than most and it will keep one guessing all the way to its impressively high tension climax. Although it does have its plot holes here and there (there seems to be a distinct sinister supernatural force in the first few kills that fades to coincidental happenings for the later ones), the film strikes out with a cleverness in story and writing that sets itself apart from the rest of the horror films released at the time.

It also helps that James Wong (long time collaborator on the "X-Files") seems hungry with his directing. Although Sawa and Larter seem to get the job done with their acting, the rest of the cast is borderline cliche at best. This rarely hinders Wong from crafting a film dire with tension and suspense - enough to actually care about who lives or dies in the film despite some hit or miss acting and oddly developed back stories. The death sequences are ripe with red herrings and quirky camera tricks to give the most mundane objects a sinister edge and the quick hearted pacing the film reaches by half way through only adds to the entertaining value of the film.

"Final Destination" doesn't jump horror films to new unseen levels or anything like that, but its diverse combination of storytelling and trendy teen slasher motifs works in spades for this first film. Although the rest of the franchise would see itself lose the cleverness to the realm of gimmick, "Final Destination" marks a moment where mainstream horror could actually be thoughtful in the late 90s and early 00s. Something that carries itself out even to this day. Worth the watch if one hasn't seen it.