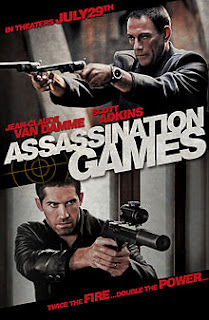 Jean Claude Van Damme may still be stuck in B-action movie purgatory, but with a little help from a director familiar with the territory and an up and coming action star like Scott Adkins (that's right, the guy from "Undisputed II" and "III") then "Assassination Games" might just be in the upper tiers for a B-action movie...and it is. Despite a rather cheesy action film plot, "Assassination Games" scratches and claws its way to be better than that which is more than respectable. It doesn't quite get there, due mostly to some poorly written moments, but the effort is more than worth the time for a Blood Brothers action film fanatic or those looking to see more Van Damme.

Vincent (Van Damme) is one of the world's best guns for hire when it comes to assassinations. When some crooked Interpol agents decide to plant a trap for rogue assassin Flint (Adkins) by releasing a ruthless crime boss (Kaye), the two efficient assassins find their paths crossing. The trap is set though and these two lovable killers are going to have to put their differences aside and team up if the job is to get done before they find themselves at the wrong end of a target.

When you have a film like this, you better hope that you get a solid cast even if they are on a slide in their careers. "Assassination Games" does it with flair. Van Damme owns his role, giving it some depth (even if it is by interacting with a prostitute and his pet turtle) where there really is none, and really solidifies the fact that he can act even if its not going to be some of the best you've seen. Partner him with the charismatic and often very awesome rising action star Scott Adkins and the duo is going to sell this movie for action fans. Hey, I got the damn thing, didn't I? Adkins does an admirable job as the driven and vengeful assassin, but the chemistry of the two together really sells the film. The few scenes where they really get to interact bring a big smile to the face and their differing styles of action hero make for some great exchanges (including a highlight scene where Van Damme blasts a guy with a shotgun).

Other than that, "Assassination Games" is a pretty standard B-movie for action fans. The plot is kick ass enough to grant some great actions scenes - including a meeting where our two assassins throw down - but gives enough drama and depth to try to be better than 'just another action movie'. Director Barbarash does the most he can with the hit or miss script and despite some obvious pacing let downs, the finale battle is rather brief anti-climactic, makes it a film that keeps the attention for its audience. The writing and execution is simply on par for the genre and not much more.

"Assassination Games" makes for a fun rental as the two leads carry the film for most of its run time, but the lacking budget and obvious script flaws hinder it from truly rising above to the potential the film could have had. It's fun to see Van Damme still kicking ass and Adkins is still a must watch for those privy to the action genre, but beyond their participation and chemistry the film is rather mediocre. Fun for a watch or so, not going to win any awards.