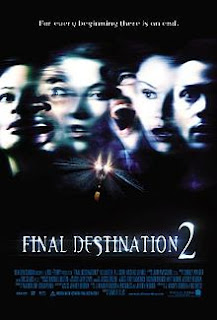 Isn't it inevitable? A low budget horror film like "Final Destination" earns a bit of money at the box office and BAM it's a damn franchise. 'Tis the way it works though and let's be honest...the horror community loves a good (or bad) franchise to praise (or criticize). That's where we end up with the first sequel, the simple and effectively titled "Final Destination 2". A film that finds itself no where near as clever or charming as the first, but certainly has its merits within the cheesy category that makes it a fun watch.

A young woman Kimberly (Cook) finds herself having a bad day. A little premonition prevents her and a line of cars on an on-ramp from going on the free way and being involved in an epic car pile up. Lucky streak, right? Wrong. Now that she has cheated death's design she realizes that death is stalking and exterminating those she stopped on the on-ramp. She has to figure out a way to beat death's design...it may take a little help from someone who's done it before - Clear Waters (Larter).

You know what? "Final Destination 2" gets an 'A' for effort. It tries. It tries really really hard to be as clever as the first film while taking the already gimmicky concept to new heights. It's a hit or miss effort, but they try really hard. They even to the length of adding a new rule into the game (thanks to a clue from murder maestro Tony Todd) for our new set of protagonists to strive for. Bringing back a character for the original one also seem legit (although its poorly written in) to give weight to this film as a sequel and on its own ground. These reasons make it worth the watch.

Beyond striving for some solid ideas, "Final Destination 2" drags a bit when it comes to making it all work. The characters are even more cliche with worse development and the structure of the film seems to be in hyper-speed rush mode just to get as much as plot and deaths on screen as possible. It has some moments that work (how each of the new characters is related to characters in the first film is a fun little twist), but generally speaking this film simply works far too hard for such little payoff.

That's all right though, because this film is the first in the franchise to put everything on the back burner and focus down on the death sequences. Plot relevance? Who needs it when you have an epic car pile up to set off the new characters to their somewhat cleverly planned and linked deaths. The improved use of gore and violence heightens these sequences to the next level and makes some of the deaths quite memorable, including a final one to end the film in hilarious effect.

There is a lot of wasted potential in this film due to some lackluster writing and poor character work, but the idea is fun and the death sequences highlight most of the film's play time. This is the beginning of the downfall for the franchise though. Fun, but rarely more than that.