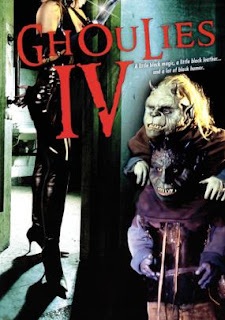 The Ghoulies franchise will never go down in history as a good horror series. It's dopey and dumb. However despite this who knew that the this series could fill the toilet more with ghoulie excrement. In comes Ghoulies fucking IV just to show that a shitty franchise can get even shittier. All I have to say is you know the film is going to be bad with B-movie master Charles Band doesn't even return to produce!

We have a smart-ass cop who investigates a satanic ritual. It happens to be connected to an ex-girlfriend who wants to resurrect some demon with an amulet. While doing so she accidentally releases two ghoulies from hell and the plot meanders boringly to a climax to free the demon.

The main problem with this fucking film is the damn ghoulies themselves. When I envision a ghoulie, it's a crappy puppet that looks melted in the sun. That's the way ghoulies are supposed to look damn it! Here our "ghoulies" are midgets in costumes. These aren't ghoulies! What's even more annoying is that these "ghoulies" don't even factor into the plot! It's like the screenwriter wrote a film about a cop with an ex-satanist girlfriends, connected it to an "established" franchise and sloppily wrote in some "ghoulie" characters. You could cut the ghoulie sequences out completely and it wouldn't affect the "plot" one iota. The film also tries to make a connection with the first film by having actor Peter Liapis return "supposedly" as the same character he played in the original. He was a geeky occultist in the original and now he is some smart mouthed, ego centric cop? I don't buy it and it's another lame attempt to make a connection. Our two "ghoulies" even have a clunky flashback sequence to the first film to reinforce to the audience that our cop is the same character. I call BULLSHIT!

What I don't get is this is directed by schlock master Jim Wynorski, who usually makes fun of genre films like this and makes them extremely entertaining (see Deathstalker II for example). However here he makes this cheap looking junk almost unwatchable. It does load the film with sexy women and nudity but that's only to hide the fact this film is a complete waste. What's ironic is that that all promotional art to this film doesn't feature the trademark toilet with a ghoulie or two coming out of it like the first three entries. If any film the series belongs in the toilet, it's this one!