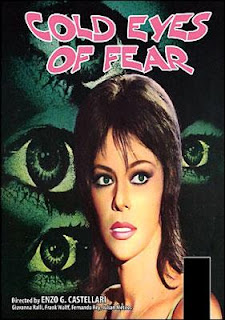 When one sees the name Enzo G. Castellari as the director of a film one expects ACTION. This is because his specialty is action films. His entries into the spaghetti western, poliziotteschi, macaroni combat genres are classic and some of the best the films the genres have to offer. He could arguable be the best action director in Italy (See "Kill Them All and Come Back Alone", "Street Law", "Keoma", "The Big Racket", "The Heroin Busters", and "The Inglorious Bastards" to see what I mean). This here lies the problem with "Cold Eyes of Fear" (or "Desperate Moments" as the opening title card reads on my DVD).

"Cold Eyes of Fear" as it is not an action film but suspense thriller, or better known to Italian film buffs as a giallo. Perhaps wanting to try something different Enzo decided to give the giallo genre a stab as they were really popular at the time this film was made (1971). The results prove that Enzo should stick with action as he seems very uncomfortable at handling the suspense/thriller genre.

The film opens with a sexy sequence that turns into a possible murder but Enzo decides to fool the audience and it all ends up being a play in front of a crowd. It's a shame the rest of the film wasn't as interesting as this opening sequence. The plot ends up revolving around an ex-con kidnapping the son of the very judge that sentenced him to prison. Not much else to say about the yawn inducing plot.

Perhaps the greatest sin Enzo makes is that the film is boring. The film just ends up being overly talky with no action. After finishing the film I couldn't believe it was directed by Enzo G. Castellari! There are a few twists but by the time they happen I was completely uninterested.

I own 37 giallo films on DVD and "Cold Eyes of Fear" is perhaps the most blah, uninteresting one in my collection. It just boggles my mind that this was directed by one of my favorite Italian directors. The film has some cool trademark Enzo camera work and it has a funky score by Ennio Morricone, but it's not enough to keep this Euro Cult enthusiast interested. Skip it unless you need a sleep aid.