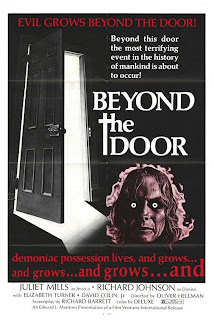 The Exorcist rocked the world when released and shook the very foundations on what was acceptable in cinema at the time. It was wonderful film with shocking imagery and deep intelligent symbolism. It is not only one of the best horror movies ever made but one of the best films ever made period. After The Exorcist a whole slew of imitators, mostly Italian, followed. The most popular yet most shameless of these cash-ins was a little film titled Beyond the Door.

What do we expect in an Exorcist rip-off? 360 degree head spin: check. Green pea soup vomit: check. Ability to control objects: check. Everything you expect is here yet like the devil incarnate himself the film is soulless, devoid of any value except for unintentional laughs.

The plot is simple: we have a pregnant women whose unborn child becomes possessed by the devil and causes here to do all sort of strange Linda Blair-like shenanigans. This results in some really unintentional laughs including her eating a rotten banana peel off the street. Perhaps my favorite sequence is when she starts puking up blood and her husband wanders in the bathroom asking "are you all right?" very mildly. Other weird things about this film is her foul mouth daughter and her son who constantly walks around with a Campbell's soup can sucking pea soup through a straw. The boy also always takes an unopened present where-ever he goes, holding it like a teddy bear. What the hell is up with this family? They all might be possessed by the Devil for all I know. Is this how director Ovidio G. Assonitis thinks an average American family functions?

After viewing this poorly lit, poorly edited drek it's hard to believe this low budget rip-off was a huge hit in the US. That is until I watched the US TV spots and trailer which actually make the film look really damn scary. Those trailer editors deserve a raise because they made shit look like gold. The film did well enough that two un-related sequels would follow in the US market.

The DVD version I have is the uncut international English language version with the title The Devil Within her on the title card. This uncut version is nothing to scream about as all you get is more footage of the father producing a shitty song in his sound studio. I actually would have preferred to see the cut US Beyond the Door version as it would be a few minutes less of torture.