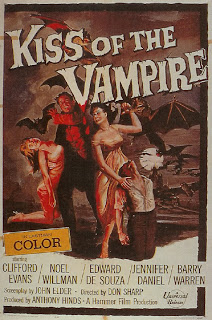 The whole time while watching this solid Hammer horror film, I kept thinking to myself it was the result of Christopher Lee refusing to return in the role of Dracula. Hammer desperately wanting to keep making vampire pictures made the Dracula-less sequel "The Brides of Dracula" and of course "The Kiss of the Vampire" which in-itself feels like a spin-off. I kid you not this film could easily take place in the same fictional universe as hammer's Dracula franchise.

Here we have a young newlywed couple traveling through a remote section of mountains until their "motor-car" runs out of "petrol" (sorry, I had to use British terms). They check into a creepy, mostly empty hotel only to get an invitation by carriage to come join a aristocratic family for dinner who live in an enormous castle on the mountainside. Being a Hammer film we all know what that family is...VAMPIRES!!! The couple happily agree and the wife not surprisingly becomes a victim to the cult of vampires. The husband seeks help from the resident "Van Helsing" wanna-be also staying in the hotel to go get her back.

The film has that ever-likable Hammer look (full of lush sets and costumes) and the story just builds and builds to it's interesting, if a little absurd climax with a wave of vampire bats coming down upon the castle (the ending was originally intended for The Brides of Dracula until Peter Cushing talked the filmmakers out of it due to it being too "supernatural"). Our young couple is very likable but extremely dumb at the same time. How many warning signs do you need to realize that family is bad news! I found myself hitting my forehead a few times at their decisions.

My one other problem with the film is Clifford Evans as Professor Zimmer. I found this character as a hollow stand-in for Van Helsing. This film would have benefited much more by having Peter Cushing return to the infamous role to aid our young man take out the vampire family elite. Overall though I didn't hate the character but it just made me wish for Van Helsing to return instead.

If you're a fan of Hammer Horror, especially Hammer's Dracula series, then you will love this film. The characters can be dimwitted but overall this is a must see for people interested in Hammer. I would have loved to have seen this film as an entry into Hammer's Dracula series. Dr. Ravna's castle on the other side of the mountain from Dracula only to have Van Helsing come knocking....oh that would have been great!