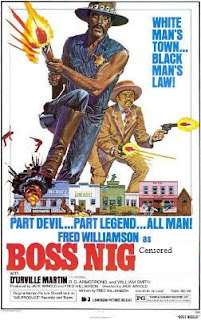 Cult blaxploitation star Fred "The Hammer" Williamson chose the attention grabbing title Boss "N word" (censored for our website) in order to cause some controversy and make his little western a hit. It worked back in 1975 but sadly as time marched on the title actually ended up hurting the film. It fell into obscurity and was only known by cult film fanatics due to its reputation by name but the film was forgotten by main stream audiences as film distribution companies wouldn't touch the film due to its controversial title. I knew of the film as Fred Williamson is one of my all time favorite cult film stars as he has had starring performances in many of my favorite Italian genre films (most notably The Inglorious Bastards). Ironically one day I find the film in the $5 bin at K-mart with its shortened censored title Boss on the DVD cover art. Some fans of the film were upset that VCI Entertainment chose to release it with the censored title on the box art but I would have done the same. Having the censored title "Boss" allows the film to be sold at many outlet stores that otherwise wouldn't touch it. Being a cult fan I knew what film "Boss" really was and quickly snagged it up as I have been drooling to see this controversial title for many years.

Despite having the censored title on the DVD box art, the VCI DVD has the film completely uncut with its original title on the film itself including the thigh slapping great title song. The film even opens with a letter from Fred Williamson saying he still approves of the title and song. However as the film trucked along I knew I was in for a film whose title had a much better reputation than the actual film. The film for the most part is just another blaxploitation, B-grade western. Don't get me wrong as it is still somewhat entertaining but other than its title it wouldn't be nearly as memorable.

The film opens with Fred Williamson and his comic sidekick D'Urville Martin roaming the west and coming into what they call a "white town." There is a sheriff and deputy position open so they take the jobs against the Mayor's (played by genre great R.G. Armstrong) wishes. The town is corrupt and the Mayor is controlled by the local villain (played by badass William Smith) and Smith doesn't take too kindly to Williamson pushing people around on his turf and violence ensues.

Fred Williamson is enjoyable as ever as he plays his usual, cocky yet likable self. He doesn't go too far out on a limb here as it's the typical good guy gets girl and kills bad guy routine. Williamson liked his film formula's that way and it's a shame as it made them very predictable, which this film is. Body builder William Smith was perfectly cast as the villain as he does play psychopaths very well, but sadly he seems underused and not his character is not given his full potential as a truly despicable villain. He does some pretty nasty things like trample a child beneath a horse but he still didn't come across as a really awful man like he has in other classic cult pictures.

The production values are also very slim here but then again it is a B-western. I especially didn't like the awful wardrobe for our villain William Smith. His shirts brought more laughter than anything. Williamson still looks badass as ever though. The film is also surprisingly old fashioned when it comes to violence. Despite Williamson working in violent urban action films and Italian films, he and director Jack Arnold chose to go the old more classical western violence route. I believe if this film had a little more extreme violence, like seen in spaghetti westerns, it would be a much more popular cult film.

Overall you have a B-grade western film that is entertaining enough but is also rather forgettable other than the attention grabbing title. I, like many others, am offended by the N word but people have to realize this film was made in a different era, a time when black power was at its height and heroes like Williamson and Jim Brown were needed as role models. It's more interesting as a historical film in that aspect rather than as a mere B-western.

Written By Eric Reifschneider
Posted by DarkReif at 8:36 PM