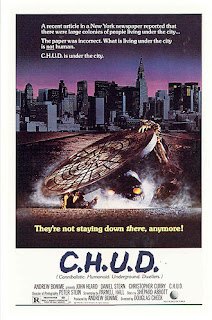 With a name like C.H.U.D. it is easy to see why the title is so popular. Hell the title is even popping up in pop culture as it has been referenced multiple times in The Simpsons and even popular Hollywood films like Clerks II. More people know the word C.H.U.D. than have actually seen the film. This is a damn shame as this is a solid B-monster movie. I would even go as far to say C.H.U.D. is an "A" of a "B" movie.

The acronym title stands for "Cannibalistic Humanoid Underground Dweller" and that just spells B-movie goodness to me. The film has a helluva pre-credits sequence with woman walking her dog down a dark, steamy, New York street. She drops her purse by a manhole and we have a monstrous arm reach out, grab her and drag her and her dog to the dingy sewers below. This, my friend, is how to open a monster movie! In comes multiple characters. First we have John Heard as a photographer who had a successful article by take pictures of homeless living in the sewer. Second we have Daniel Stern as a soup kitchen owner who is concerned that his "underground" clientele are disappearing. Third, we have Christopher Curry as a police captain who is stressed because of all the new missing persons cases, including his wife. All three main characters story lines conjoin in a plot about the government secretly dumping toxic waste beneath the city of New York turning homeless people into bug eyed, slobbering monsters with a taste for human flesh.

The absolute best part of this film is the cast and they take this B-grade material and give it all. The acting is just fantastic with all the characters going through an array of emotions. Very rare for this type of film! Director Douglas Cheek also loads the film with plenty of scares, suspense, and even some shocking gore. The suspense hits its peak when two of our characters get trapped in the sewer towards the end with C.H.U.D.s on their tail as the government is filling the sewer with gas. Tense stuff and I commend Douglas Cheek for getting this horror movie buff on the edge of his seat, which doesn't happen all the often anymore! Another thing I have to commend the movie on is the absolute gritty and filthiness to the whole project. Again Douglas captures the nastiness of the New York sewers perfectly. All the characters go around with grime covering their cloths and skin. By the time the film was over I wanted to take a shower. A very authentic feel.

Many people complain about the C.H.U.D. designs. I have to disagree. For a low budget movie I found these things to look pretty damn scary, minus their glowing eyes. One scene with a C.H.U.D. that annoys me though is towards the end when a C.H.U.D. has a women trapped in her apartment. It breaks in and has its neck grow long only for her to lop it off. I'm not sure what the filmmakers had in mind with the thing growing it's neck long but it just came out cheesy and stupid. Other than that short sequence I thought the C.H.U.D.s were good and fit the film.

Overall I found this to be a classic B-monster movie from the 80's. It's got great acting, strong pace, tense sequences, a few shocking gore scenes, and grimy feel makes this a classic of the genre that just doesn't seem to get the respect it deserves. The original version I saw on VHS was a butchered version. It completely re-edited events so many sub-stories made no sense. The newer DVD release I have is the complete unedited version and all the sequences are where they belong, making the film flow like it should. Make sure to get the Anchor Bay release and avoid the old VHS tape versions to get the true vision of the film. 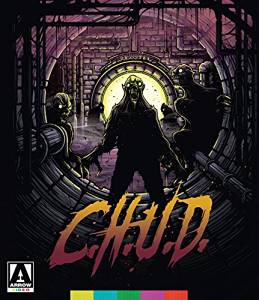 At the end of Eric's review, he mentions to purchase the Anchor Bay release and avoid the old VHS tape versions to get the true vision of the film. Well, Arrow Video has stomped on that one. Thirty years after the release of this cult classic, Arrow has dropped a new definitive release for fans. The film is already know to be one that was substantially ahead of the curve with its combination of dramatic social commentary and B-level creature feature, but their latest Blu Ray release is easily the best this film has ever looked and/or sounded and its packed to the gills with features. Not only does it feature both cuts of the film, as mentioned in the review above, but it features two brand new interviews, an extended scene, a couple of commentaries, and more. That is, of course, on top of the brand new restoration of the film. Truly, this is the way to experience the grime and scares of this 80s classic if there ever was one and Arrow deliver the goods for fans on this release. It comes with a very loud and semi-nuclear recommendation.