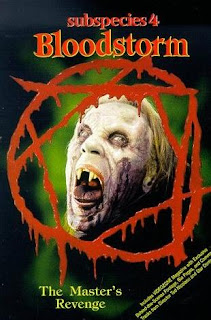 Subspecies may not have been a great series, but it was a solid direct-to-video vampire franchise with its first three entries. It was a solid trilogy...a trilogy that should have been left alone. Full Moon Entertainment was going through some financial hell and decided to resurrect some of their successful franchises in order to make a quick buck. The few examples were Curse of the Puppet Master and Trancers 6. Full Moon fans know how great those crap shoot sequels turned out . Sadly Full Moon also decided to resurrect the Subspecies franchise with Subspecies 4: Bloodstorm. A more apt title would be " Shitstorm" as this sequel defecates on all that made the original three films likable.

I knew I was in trouble right after viewing the opening credits. The credits are so god-damn cheap that it looks like I could have made them on my personal computer. This is a damn shame as Subspecies II and III had impressive title sequences that actually made the films look like they had quality. The film then opens right after the last film except the filmmakers do the unthinkable. Apparently they couldn't get some of the actors who survived part 3 to return for this sequel so the writers decided to open the with a car crash, killing our "survivors". What a cheap fucking cop out! This even makes the death of Hicks and Newt in Alien 3 look pale by comparison! The only returning cast members are Denice Duff and Anders Hove as Radu. The plot is extremely predictable. Radu survives and goes after Denice Duff yet a-fuckin-gain. Yawn. This film even has the gall to have characters that appeared in the Full Moon film "Vampire Journals" show up. That film was not part of the Subspecies franchise but thanks to this sequel it is now considered a "spin-off." I hate when filmmakers take characters from another film and place them in a completely different film and act like they have been there from the beginning. The only reason writer/director Ted Nicolaou only did this to try to pad the film with a little more plot.

Not only are the opening titles and plot bad, but so is the look of the film. This film looks like it was filmed with a $50 home digital camera. That mixed with bad DVD transfer makes this film almost unwatchable. Another thing I have to rant about is the title. The Subspecies sequels had a pattern to the title scheme - Bloodstone: Subspecies II and Bloodlust: Subspecies III. It was simple, have a "blood" word and then have Subspecies as your subtitle with a classy roman numeral. It was simple and it gave the series flow. Leave it to Subspecies: Shitstorm to fuck the simple task up. First it puts Suspecies as the main title again, then changes the roman numeral to a number 4. Shouldn't be Bloodstorm: Subspecies IV? Oh fuck no! This may sound like a minor problem but come on! Are the promotional artists blind? Can't they see the flow to the titles?

As you can tell I hated this sequel with a passion. I love the cheesy Full Moon films of old but their newer films are just god awful and the company making shitty cash 'n grab sequels, tarnishing the names of their hit franchises just pisses me off. What makes me even more mad is that this sequel is from the same writer/director of the first three! I actually hate this sequel so much that I sold my DVD of the film and pretend it never existed. That's hardcore for me since I'm a completist when it comes of film series and in turn own many god-awful sequels. I even own Texas Chainsaw Massacre: The Next Generation and Ghoulies IV. That says something!