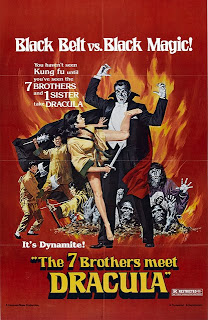 As one final swift kick to the long dead, decaying carcass of a horse, Hammer made one last entry into their Dracula franchise, this rounding out the series at number nine. That's almost as many as Friday the 13th! For this entry though Hammer really decided to change it up by making this a co-production with Hong Kong's legendary production company Shaw Brothers. Well this can't be too bad as I love Hammer and I also love Shaw Brothers (more so Hammer). Well...let's just say the results come out very mixed.

The film opens with an Asian marching through the Carpathian mountains where he arrives at Dracula's castle. There he meets with Dracula (now played by John Forbes-Robertson) and the traveler tells him how he was the leader of the great 7 golden vampires in China and he needs Dracula's help to raise them up again to make them the monstrous rulers they once were. Dracula then proceeds in an extremely cheesy sequence to take over the travelers body to go to China to rule the 7 Golden Vampires.

In the mean time we are re-introduced to Van Helsing (Peter Cushing, making this his fifth appearance in the franchise) teaching in Hong Kong. He is approached by a young man saying that the 7 golden vampires do exist and so Van Helsing, being the fearless vampire slayer that he is, decides to trek across China with his son to rid the country-side of evil once and for all, that is until he comes face-to-face with his arch nemesis Dracula!

This being a Shaw Brothers co-production one can expect some Kung Fu. Believe me there is kung fu and it's very surreal seeing this kind of action in a Hammer film. The kung fu sequences were even directed by regular Shaw Brothers director Cheh Chang (uncredited) while the rest of the film was directed by Hammer veteran Roy Ward Baker. Like I expected the kung fu and hammer style horror doesn't gel perfectly and this could also be attributed to two different directors at the helm. It seems that Christopher Lee knew it was going to be a bad idea because he turned down the chance to reprise his role as Dracula one last time. Speaking of Dracula, John Forbes-Robertson isn't bad at all in the role but his portrayal is mostly thankless as his character really offers nothing to the plot. This film could have easily been made without the likes of Dracula and it seems the writers added him just to make a link with a solidified franchise. As for the 7 golden vampires themselves...they look like a complete joke. The make-up is awful and I never felt that the character were once threatened by these horrible looking things. Another thing that bothers me is this entry throws the continuity with the series completely out the window. It ignores entries 2 through 7 and seems to be a direct sequel to the first film Horror of Dracula. I've mentioned in other reviews that I like continuity between sequels and this laziness by the writers just infuriates me.

Overall I found this film extremely cheesy and a shadow of former Hammer glories. Hell it's even easy to say this is the weakest entry into the Dracula franchise...however it is at the same time it's one of the most interesting due to its mixture of cultures and genres. One could joke that a series has gone on too long when the plot takes place in space. One can now also say that adding Kung Fu to the plot can mean the same.

On a side note I should mention that the DVD I have also contains the American edit with the title The Seven Brothers Meet Dracula. This version completely re-edits the film so that plot doesn't have any flow. If I would have seen that version first I would have easily given the film 1 star. Thanks to Anchor Bay they also provided the un-edited UK version of the film preserving the look the original directors envisioned. It's nice to have both versions just to see how distributors can fuck up a film even more but make sure to watch "The Legend of the 7 Golden Vampires" version first to get the true cheesy effect.