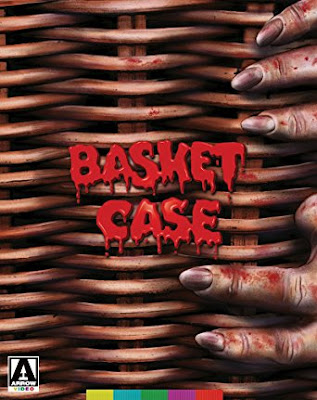 Every now and then (especially in the 60's, 70's and 80's) there's a low budget horror film comes out that really adds something fresh to the genre. After viewing Basket Case it's easy to see why this film became an underground classic back in 1982 because it really was something different. So much in fact that it took this reviewer a few viewings to truly like the film. What me, a horror connoisseur didn't like Basket Case that much on first viewing? This shows you that some films shouldn't be judged on first viewing alone and sometimes it takes a second watch for everything to sink into place.

The cleverly titled Basket Case has a young man check into a seedy motel on the New York strip. The peculiar thing about this strange young man is that he is carrying a huge wicker basket with him where ever goes. What the hell does he have in the basket? Later we find he keeps his morbidly deformed twin hidden behind it's woven plant fibers. The gruesome twosome is on the revenge to kill all the doctors that separated them when they were young. And boy do they kill them! Our little deformed creature named Belial likes his kills bloody making this a must for gore hounds. While on their mission, our older and normal looking brother starts to fall in love and Belial doesn't like the fact that someone else may become more important in his brother's life and in turn decides to go after his lover, in a gruesome and perverse way.

The thing that threw me off on first viewing was the EXTREMELY low budget of this film. We aren't talking show-string, we're talking no fucking strings. Everything just looked so god-damn cheap to me at first. Upon second viewing I actually became amazed on what the filmmakers were able to accomplish with nothing. The prop that suffers the most from the lack of budget is the look of Belial himself (or would it be "itself"?), who just looks like a rubberized chew toy with eyes that light up. However even his appearance grows on you like a callus on your foot. Since the film had no budget the crew actually filmed this in actually seedy locations giving this film a real authentic New York look. That mixed with truly perverse sequences made me instantly want to jump in the shower afterwords.

This film is definitely not for all tastes. It's actually made for those who are able to handle tastelessness. The crazy humor, the outrageous gore, and the colorful supporting cast really grew on me. There is a sequence towards the end involving Belial and his brothers girlfriend that many will find offensive (hell some of the crew even walked off the set while filming it) so you've been warned. My second viewing gave me new found respect for director Frank Henenlotter, a director who has a few films worth horror fans discovering, especially Basket Case. 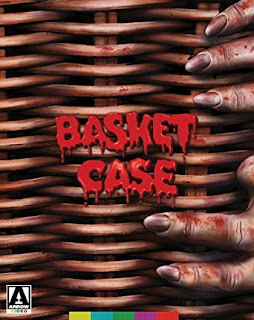 
Basket Case is one of those films that defies traditional review. In many ways, any film by iconic cult director Henenlotter can be considered a film that exists outside of the realms of traditional reviewing. This is a film that, by all intents and purposes, intentionally tries to use the horror formula and then undermines it with its style and sheer oddity of concept. It’s also the reason why the film has found its dedicated cult following in the years since its release and perhaps the greatest Blu Ray release of the year. Arrow Video take Basket Case to the next level with this release, packing it with enough features to dumbfound most snobby cinephiles, and it’s glorious. The film remains one that appeals to niche group of cult cinema fans, but if you were to judge the film solely on this release you would think it’s one of the truly groundbreaking films to change cinema forever. Only a film like Basket Case would deserve such idealistic treatment as a cult film and it’s only fitting that a film as often awkward and strange as this is the one that deserves it.

When it comes to the film itself, Basket Case is the kind of slightly seedy, off kilter horror that was the perfect counterbalance the slasher boom of the 1980s era that it came out during. Director Henenlotter uses this sense of unbalance to invoke a lot of different feelings about the film, but it does craft this almost fantastical edge to the film that allows it to be both unnerving and completely hilarious at the same time. As Eric mentions in the review above, it’s a film that can take some time to digest for a viewer, but for those who do, it’s certainly going to be a memorable one and make it onto plenty of ‘must-see’ cult cinema lists.

However, Basket Case, as a film, is not the only memorable thing about this latest Arrow Video release. This film is given pristine treatment. Not only in its new restoration, but in the piles and piles of special features that are jam-packed into this release. If you think seeing a disfigured Bilial pop out of a wicker basket is is shocking, just wait until you open up that special features menu on this Blu Ray disc. New 4K restoration, featurettes, commentaries, and enough new interviews to shake a stick at are all present on this release. Even if you consider yourself REMOTELY a fan of this film, this is a release that needs to be in your collection. It’s that impressive.