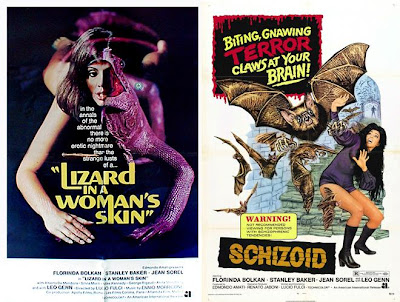 Lucio Fulci is mostly known today as the "Godfather of Gore" with his splatter classics like "Zombie", "City of the Living Dead", "The Beyond" and "House by the Cemetery". Lucio Fulci actually had a more humble beginning in the director's field and towards the beginning of his career he directed some beautiful suspense thrillers in the giallo genre. They are a little more tame then his more popular films but in many ways these thrillers are far better and more respectable.

Anybody who believes Fulci to be a no-talent hack who only makes movies filled with gore for shock value owe it to themselves to view this film. Fulci's direction is solid and the film is beautifully shot. Numerous sequences had me admire the film like a painting. People who want some shocking gore factor will even get a little of that as Fulci liked to shock audiences even back in his early days as a director. There is a sequence where our main character is running from a slasher and she runs into a room where there are mutilated dogs being medically tested on. The dogs apparently looked so real that Fulci was taken to court to prove that they were only special effects. See, Fulci was even controversial way back then.

There are two versions of this film available: a cut version entitled "Schizoid" and uncut version entitled "Lizard in a Woman's Skin". The Shriek DVD I have has both versions but the uncut version is taken from a VHS source and the cut version is in beautiful anamorphic widescreen. That means if I want to see the dog sequence I have to watch the cruddy VHS sourced version! Thankfully Media-Blasters fixed the problem and spliced the cut footage from the VHS version into the higher quality cut version and re-released the film on DVD. Try to see that release if at all possible to get the full effect of this classic giallo thriller that is sure to appease Euro cult fanatics.