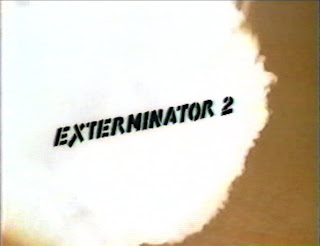 Robert Giny returns as "The Exterminator" only with one difference. This time they his uses the flamethrower that he proudly displayed on the poster art of the original film (but never used as his main weapon). Basically he still roams the streets of New York killing thugs with his trusty weapon of fire. Things are going smoothly for him as he befriends another Vietnam vet working as a garbage man and he even scores a girlfriend with a stripper! Sadly since this is an Exterminator film we all know his happy world is going to come crashing down in a wall of flame. In comes a gang leader named "X" (Mario Van Peebles in one of his first film roles). X ends up killing his friend, paralyzing his girlfriend making Ginty go rampage once again.
I actually saw "Exterminator 2" before the first film. I purchased real cheap used because I was, and still am, a huge fan of the Cannon Group. I saw the "Exterminator" a couple years later and was a little disappointed at first for the drastic tone difference (that film is serious) and for the simple fact The Exterminator didn't use his trademark flamethrower. Though over time I have actually learned to appreciate the first film more but that doesn't mean I don't enjoy the ultra cheesiness of this sequel. By far my favorite sequence is towards the end with the Exterminator rigs up a garbage truck with a plow, bullet proof metal covering, and machine guns to go after our thugs.
One must go into this film expecting cheesy revenge film, similarly toned to other Cannon film productions (especially "Death Wish 3"). The acting is bad and the plot is cliché, but that all adds to the fun. People expecting a serious sequel with the tone of the first film might be a little disappointed but fans of cheesy violent action films will have a ball. Sadly years ago I sold my VHS copy (I'm still kicking myself) thinking the film would eventually come to DVD. So far no DVD has come and that is a damn shame as this film is gathering a growing cult following and that following would be even larger if the film was more widely available. Thankfully my friend Bill again scored a copy for me so I was able to fulfill my nostalgia for the film. This film is begging for a DVD release so please take so time to sign my petition to MGM/Fox to get this film released: http://www.petitiononline.com/cannon/petition.html