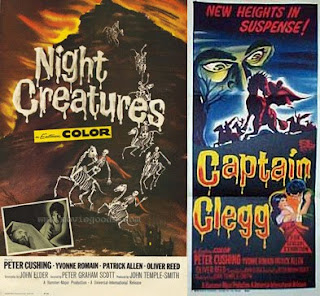 I was really geared to see Night Creatures (known as Captain Clegg in native England). First it's a Hammer film, and I love Hammer! Second it stars Peter Cushing and Oliver Reed, two top Hammer stars. Third the story has ghosts and pirates. A swashbuckling pirate hammer horror film! Sign me up! That novel idea ended up being a wet dream and I emerged from the film let down and disappointed.

The film opens promising enough on a pirate ship where a crew member is sentenced to die on island for threatening the captains wife. It cuts later to a coastal community where some lawmen show up to see if the community is smuggling alcohol as well to investigate the death of an undercover soldier that supposedly died by some "marsh phantoms", which just look like men dressed up in skeleton costumes with dark lights shining upon them.

Though described as "swashbuckling" in many descriptions, this is actually a land locked "pirate" film with hardly any "horror". Despite this film being featured in a DVD set entitled "The Hammer Horror Series" and it's deceptive original poster art, I wouldn't even consider this a horror film. The plot is overly talky with very little action making this more far more of a melodrama. The directing of the film is also far less stylized than other films in the Hammer catalog, no doubt due to director Peter Graham Scott mostly known as a TV director. Though sluggish the film does have a nice twist at the end and the star power of Peter Cushing and Oliver Reed kept me watching until the credits rolled. It was also nice to see a Hammer film for once that looked like it was filmed on many live locations as opposed to sets like many of their other features.

Fans must not go into this not expecting a "horror" film. It is a melodrama. I was fooled and came out really disappointed with the results. Die hard Hammer fans will find something to like but others shouldn't work too hard to hunt this rare title down.